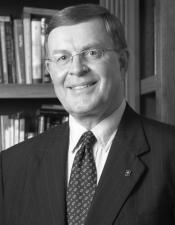 Dr. Larry D. Shinn brings the experience of his 42-year career in higher education to work collaboratively with presidents and boards of trustees. Currently a trustee of the University of Mount Union, Dr. Shinn most recently served as president of Berea College and is now President Emeritus. There he co-chaired a strategic planning council that produced “Being and Becoming: Berea College in the 21st Century.” This strategic plan resulted in initiatives that produced far-reaching results, including a 12-percent increase of African Americans in the student body, increases in retention and graduation rates, expansion of students studying abroad, and “deep green” building renovations. Before joining Berea, Dr. Shinn began his career as a professor at Oberlin College and served as a dean and academic vice president at Bucknell University.

Dr. Shinn earned a BA from Baldwin-Wallace College, a MDiv from Drew Theological School, and a PhD from Princeton University.