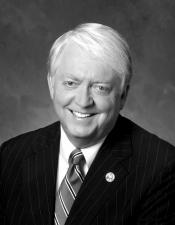 Dr. Michael F. Adams was named chancellor of Pepperdine University in August 2015, having served as vice president for university affairs at Pepperdine earlier in his career. As chancellor, Dr. Adams’ focus is on cultivating existing relationships and developing new partnerships to extend Pepperdine’s reach throughout Southern California and around the globe. Previously, Dr. Adams held the titles president emeritus and regents’ professor at the University of Georgia. Under his leadership, from 1997 to 2013, the university was recognized as one of the nation’s top 20 public research universities for eight out of 10 years by U.S. News & World Report. During his tenure, the university also attained its highest rankings ever, became the most selective in its history, and grew from an estimated 29,000 students to almost 35,000 students today. Prior to his term at the University of Georgia, he served as president of Centre College in Danville, Kentucky, one of America’s top 40 liberal arts colleges, from 1989 to 1997.

Dr. Adams earned a PhD from The Ohio State University and has been awarded five honorary degrees.