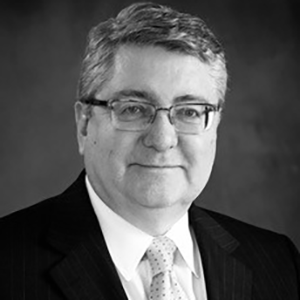 Dr. S. Alan Ray led Elmhurst College from 2008 to 2015 and served as president of Fisher College from 2017 until his retirement in July 2020. Over a career of more than three decades in senior academic administration and teaching, his service includes four years as vice provost for academic affairs and senior vice provost at the University of New Hampshire, preceded by eight years as associate dean for academic affairs at Harvard Law School. His work in higher education is informed by his legal background: a former municipal law attorney, Dr. Ray practiced in Los Angeles and Boston before joining Harvard Law’s senior team in 1996.
Dr. Ray’s work centers on strategic planning and institutional reform, including online learning; financial management and investment; assessment and accreditation; emergency planning and response; board governance; and campus diversity. Dr. Ray is a citizen of the Oklahoma-based Cherokee Nation and is a national speaker on Native American cultural and legal issues. In 2010, President Obama appointed him to the National Advisory Council on Indian Education.

Dr. Ray earned a PhD in the humanities from Harvard University and a JD from the University of California, Hastings College of the Law. His numerous board memberships have included the Council of Independent Colleges and Chicago Theological Seminary. He served two terms on the Leadership Commission of the American Council on Education. Dr. Ray has served on the Tax Policy Committee of the National Association of Independent Colleges and Universities, and on the board of directors of the Massachusetts Educational Financing Authority.