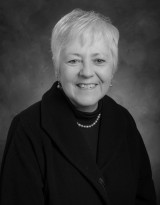 Dr. Sally Mason served as the 20th president of the University of Iowa from 2007 through 2015. Trained as a cell developmental biologist, she also holds a full professorship in the department of biology in the college of liberal arts and sciences. As president, Dr. Mason oversaw a historic era of campus transformation, including rebuilding in the wake of the historic 2008 flooding, especially the renewal of an arts campus for the 21st century; the construction of a state- of-the-art children’s hospital and biomedical discovery research center; and the first new residence hall since 1968. Under her leadership, the university successfully met current economic challenges through careful planning, strategic prioritization, and increased efficiency. Other major accomplishments during her tenure included a student success initiative that led to increased enrollment and student retention, as well as an expansion of partnership agreements with Iowa’s community colleges in order to offer UI degrees to students throughout the state through on-site and distance learning programs. Dr. Mason is the author of many scientific papers and has obtained a number of research grants from the National Science Foundation, the National Institutes of Health, the Wesley Research Foundation, and the Lilly Endowment.