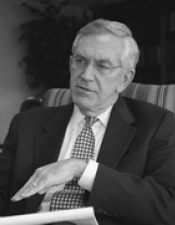 Dr. Meredith earned his BA degree from Kentucky Wesleyan College, an MA from Western Kentucky University, and an EdD from the University of Mississippi. He also completed the Institute for Educational Management at Harvard University and the Higher Education Roundtable at Oxford University. He holds two honorary doctorates. He has served on numerous educational and corporate boards. He was president of the National Association of System Heads (NASH), an organization made up of the chief executive officers of the 52 public higher education systems in the United States. He was also chair of the American Association of State Colleges and Universities (AASCU), the first head of a university system to serve in that capacity. Dr. Meredith has also served on the executive committee of the Southern Regional Educational Board (SREB) and has served as the chair of the Council of Presidents in both Alabama and Kentucky.