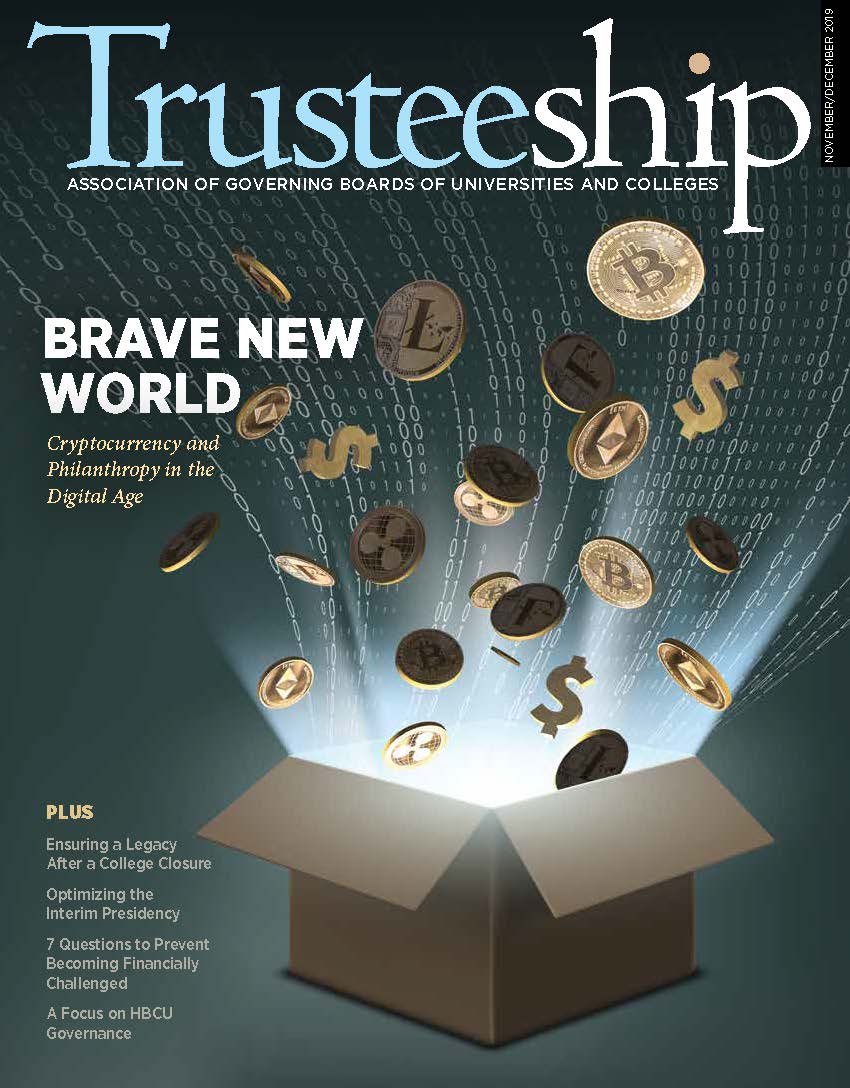 In a new era of technology, gifts in the form of cryptocurrency can present new challenges and opportunities for universities and institutionally related foundations. The San Francisco State University’s experience of successfully receiving its first transformational gift of cryptocurrency can inform other boards and foundations about how to navigate accepting such a gift.

In today’s global environment, foundation boards must be cognizant of new opportunities and challenges presented by the 21st-century economy as they manage their endowment portfolios. Technology has spurred the rise of cryptocurrency, which is any form of currency that only exists digitally, which usually has no central issuing or regulating authority but instead uses a decentralized system to record transactions and manage the issuance of new units. Cryptocurrency is only a decade old and has already produced hundreds of millionaires, a number of billionaires, and may produce the world’s first trillionaires in the next decade. This virtual asset and the new wealth create opportunities for university-affiliated foundations and boards to discuss the benefits and challenges of accepting such an asset.

In fall of 2018, San Francisco State University and the San Francisco State Foundation secured the largest gift of cryptocurrency received by a public university in the United States to date. The gift was received as part of San Francisco State’s first comprehensive campaign, “Bold Thinking: The Campaign for San Francisco State.” This transformative gift the“Larsen gift”—of $25 million—was composed of both cash and XRP, a digital currency, from entrepreneur and technology innovator, Chris Larsen (a cofounder and current executive chairman of Ripple Labs and the creator of Ripple, an open-source, distributed payment protocol) and the Rippleworks Foundation. Ripple is a virtual-currency company that traffics in a digital currency of its own creation called XRP, which enables financial institutions to transfer money across the country or around the world. As of April 2018, XRP was considered the third biggest cryptocurrency (based on market capitalization) behind Bitcoin and Ethereum.

The Larsen gift of $25 million was a blended gift composed of $3 million in cash and the equivalent of $22 million in XRP to elevate SF State’s focus on innovation-oriented learning and professional development, as well as to name the College of Business the Lam Family College of Business in honor of Larsen’s wife, Lyna Lam, and her family.

The donor’s intent was to enrich the learning, research, and professional development of both students and faculty of San Francisco State University—especially those scholars and future leaders who intersect with the College of Business. The Larsen gift provided the resources to enable the faculty to focus on innovation-oriented learning and professional development, such as entrepreneurship; commercial incubation; global economic development and studies; financial technologies (including existing and future emerging markets, and digital currencies); and artificial intelligence development.

Preparing for the Gift of Cryptocurrency

In the spring 2018, San Francisco State University’s dean of the College of Business, the vice president for university advancement, the provost, and the president had a number of meetings with Larsen to present the vision for the college and discuss a funding proposal. Following Larsen’s approval to fund the leadership gift, the university’s vice president for advancement began the process of due diligence to better understand the issues involved in accepting a gift of digital currency, especially one of this size, and the complexity of it as this was the university’s first gift of cryptocurrency. The initial challenge was to fully understand the dimension of the gift of XRP and to be able to explain it to the university’s leadership, the campaign committee, and the foundation board. The fact that Larsen is an SF State alumnus (class of 1984), a major donor, and nationally recognized leader in technology and innovation made the initial know your client (KYC) vetting process seamless and reassuring to the university’s leadership.

As part of our due diligence, we started by reviewing the foundation’s gift acceptance policy. The gift policy outlined the traditional forms of cash, stocks, and property but did not reference gifts of cryptocurrency. We learned that in 2014, the Internal Revenue Service issued a notice providing a framework relating to virtual currencies. IRS Notice 2014-21 states that virtual currency is property for federal tax purposes and provides guidance regarding how general federal tax principles apply to virtual currency transactions. The notice stated that the IRS will treat cryptocurrency as property, rather than a form of currency, for federal income tax purposes. Prior to the notice, there had not been formal guidance relating to the asset classification of bitcoins or other virtual currencies. Hence, the proposed gift fell within our established gift-acceptance policies.

The more challenging issue was how the university’s foundation would accept and liquidate the digital currency and, most importantly, what steps would be needed to protect the university and foundation in terms of holding the property and the volatility of the cryptocurrency’s value.

The vice president for advancement reached out to colleagues at the Silicon Valley Community Foundation and the foundation’s legal counsel for guidance in navigating this new world of cryptocurrency and philanthropy. External legal counsel helped develop the gift instrument between San Francisco State Foundation and the donor and included language that the donor would make up any difference or shortfall between the pledged gift amount and the actual dollars received from the sale of the cryptocurrency. This additional clause was intended to address concerns about the cryptocurrency’s volatility.

Liquidating the Gift of Cryptocurrency

Per established practice, gift acceptance policies require that when a gift of property or stock is received, the asset is liquidated upon receipt because of its volatility and the related cost of holding the gift. In this case, because of the nature of cryptocurrency, we could not liquidate the currency immediately as this could destabilize the market. As such, the donor and the foundation agreed to a schedule for liquidating the XRP.

The first step in the liquidation process was to secure a “market maker,” one that was experienced in the cryptocurrency space and knew how to appropriately convert such an asset to actual dollars. The foundation contracted with GSR Holdings, Inc. to serve as its market maker. GSR set up a “cold wallet” for the foundation into which all donations of cryptocurrency were deposited. The agreed-upon schedule was to liquidate up to three basis points (bps) of the accessible daily volume in XRP per day, as determined by GSR. When it was ready to make a sale, usually on a weekly basis, GSR transferred the agreed-upon amount into a “hot wallet” and provided the foundation with a report of the transaction, including sale price, rate, and amount.

The Lam Family College of Business

In May 2019, following the successful liquidation of the XRP, the California State University Board of Trustees recognized the history of generosity by Chris Larsen and Lyna Lam to San Francisco State and ratified the naming of the college as the Lam Family College of Business, which made the college the first and only named college at the university.

It took the foundation 12 months from the time that Larsen agreed to fund the proposal to name the college of business to the final approval by the California State University Board of Trustees. It is important to note that the naming of the college of business was approved even though not all of the XRP units were sold. However, the board of trustees was reassured by the shortfall clause in the gift agreement.

The following are a few lessons learned and recommendations from the San Francisco State University Foundation experience:

● Cryptocurrency is an emerging force in the global financial infrastructure and presents both opportunities and challenges to philanthropy;
● Cryptocurrency is a timely and interesting topic for a board study session and discussion to gauge board interest in accepting such gifts when the opportunity is presented;
● Consider whether your gift acceptance policy needs to specifically reference gifts of cryptocurrency or if the existing policy on accepting gifts such as property is sufficient;
● Become familiar with how market makers such as GSR, BitPay, and Coinbase operate and the costs and services they provide;
● Consult with legal counsel, foundations, or nonprofits that are experienced in receiving gifts of cryptocurrency and determining gift values;
● Have a conversation with donors about their willingness to shore up the gift in light of market volatility; and
● Begin establishing an infrastructure so that if you were to receive a gift of cryptocurrency, you are able to accept and liquidate the gift in a timely manner.

The San Francisco State Foundation had a successful and transformative experience with the Larsen gift. However, the question remains whether cryptocurrency will be the new norm and a disruptive force in traditional philanthropy, especially among millennials over the next 5 to 10 years. Large foundations such as the Silicon Valley Community Foundation and Fidelity Charitable have extensive experience in accepting gifts of cryptocurrency, along with large non-profit organizations like the United Way and the Red Cross, which continue to open new opportunities for cryptophilanthropy. Cryptocurrency and cryptophilanthropy represent a brave new world and a disruptive force. Universities as centers of innovation, along with their affiliated foundations, are well positioned to capitalize on the opportunities presented by cryptophilanthropy.

Venesia Thompson-Ramsay, MA, is the vice president for university advancement (interim) and the president of the San Francisco State Foundation.

A market maker is a liquidity provider (company or an individual) that quotes both a buy and a sell price in a financial instrument or commodity held in inventory hoping to make a profit on the bid-offer spread, or turn.

Bitstamp is a bitcoin exchange based in Luxembourg, with offices in London and Slovenia. It allows the conversion between money (coins and banknotes) and cryptocurrency.

■Cryptocurrency is an emerging force in the global financial infrastructure and presents both opportunities and challenges to philanthropy.
■Cryptocurrency is a timely and interesting topic for a board study session and discussion to gauge board interest in accepting such gifts when the opportunity is presented.
■Consider whether your gift acceptance policy needs to specifically reference gifts of cryptocurrency or if the existing policy on accepting gifts such as property is sufficient.
■Become familiar with how market makers such as GSR, BitPay, and Coinbase operate and the costs and services they provide.