Hungry and Homeless: Tackling the Crisis of Basic Needs Insecurity 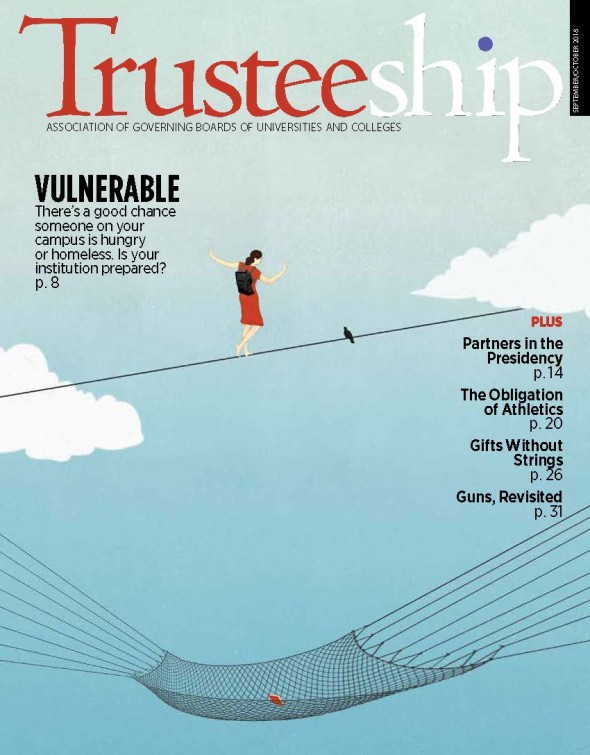 The number of students on the nation’s college and university campuses who do not have enough to eat or a safe place to sleep is a growing crisis. The problem of basic needs insecurity appears to affect most, if not all, institutions of higher education today. It is not relegated to community colleges or broad-access institutions, or even those in high-cost urban areas. And it threatens the ability of higher education to serve as an engine for social mobility and economic development at a time when the budgets of many colleges and universities are already fragile and when institutions are being scrutinized about costs and access.

Large numbers of students are leaving college because of basic needs insecurity despite being in good academic standing. The good news is that colleges can address these needs while sticking to their mission, and costs can be manageable. The payoff can be substantial: helping students reach the finish line not only can boost degree completion rates but also can improve their well-being and even increase the odds they will repay their student loans.

The changing demographics of higher education—and in particular the large number of students receiving the federal Pell Grant—are well known. But what is not widely known is that food and housing insecurity affects middle-class students and those with educational advantages, not just low-income and first-generation students. In other words, while the average return on college remains high for those who complete credentials, a growing number of students are impoverished during college— whether or not they grew up in poverty.

Surveys conducted at community colleges and four-year colleges and universities around the country (including California State University, the University of California, and the City University of New York) indicate that at least one-third of students at bachelor’s degree-granting institutions and 40 to 50 percent of community college students are dealing with food and/or housing insecurity. Sizable numbers of students are also coping with homelessness. Two recent studies from the Wisconsin HOPE Lab suggest that between 12 and 14 percent of community college students experienced homelessness in the last year, as did 9 percent of university students. While the federal government’s surveys of undergraduates do not include robust measures of food or housing insecurity, the 2015–2016 National Postsecondary Student Aid Survey suggests a conservative estimate of 9 percent homelessness among all undergraduates.

Some students are at much greater risk of basic needs insecurity than others. For example, one of the HOPE Lab’s recent studies, Still Hungry and Homeless on Campus, found that more than 60 percent of former foster youth were both food and housing insecure, and 24 percent had experienced homelessness in the last year. Students identifying as non-binary and those who are homosexual or bisexual were also greatly overrepresented among students enduring basic needs insecurities. African- American and Native American students were much more likely than non-Hispanic white or Asian students to experience food or housing insecurity. Compared with non-Pell students, Pell recipients are 14 to 20 percentage points more likely to experience food and housing insecurity, and 4 to 6 percentage points more likely to experience homelessness.

The amount of time committed to college— both time spent in class and time spent studying—is very similar for students whose basic needs are secured and those who are enduring food and/or housing insecurity. But that time commitment does not translate into similar levels of success. Among students who reported receiving Ds and Fs in college, more than half were food insecure, with more than 40 percent at the very lowest level of food security. Rates of housing insecurity among these students were even higher: Over the past year, more than 55 percent were housing insecure, and more than one-fifth were homeless.

Despite the evidence that food and housing insecurity and homelessness are real challenges to students today, few support systems are in place at community colleges, universities, or in the broader community. In the HOPE Lab’s recent survey, only 26 percent of food insecure students at two-year colleges and 12 percent at four-year colleges received Supplemental Nutrition Assistance Program (SNAP) benefits. Among those who experienced homelessness in the past year, only 8 percent of two-year students and 5 percent of four-year students received housing assistance.

WHAT IS CAUSING THIS CRISIS?

Eating ramen in college is not new; even 40 years ago some students struggled to make ends meet. But the sheer number of students in higher education was far lower (6 million in the 1970s, compared with about 18 million today), most of their families had at least some resources (now, 1 in 4 students has a child to care for and many students have to provide money to their parents while attending college), and public benefits programs helped when financial aid fell short. Today, a potent combination of rising tuition, increasing cost of living, stagnant family income, declining state support, and a greatly diminished safety net mark the new economics of college in America. The problems go well beyond a ramen diet, as talent, hard work, and determination to obtain a degree aren’t enough to feed a student.

One of the most serious problems is the overt conflict between the requirements of government social programs and the requirements of academic success in college. Research clearly shows that working long hours contributes to bad grades and high dropout rates, yet a childless adult who needs food stamps must work at least 20 hours per week. Except in a few states, college doesn’t count as work. Young people growing up in public housing, graduating from high school and enrolling in college may be surprised when they find that attending full-time renders them ineligible to continue to live in their family’s home. They must move out, cut back to part-time, or risk their family having to leave public housing—before they have secured the economic benefits of a college degree.

College leaders need to understand these challenges and work with policy makers to overcome them, but they often are unaware of the reality of the situation. Students earning Ds and Fs are targeted for academic support, assigned advisors, and placed on probation, as many college administrators lament their academic underpreparedness. But how many leaders realize that about half of students with low grades are dealing with food and/or housing insecurity? Might feeding them be less expensive, and a more sensible first step?

WHAT CAN TRUSTEES DO?

With commonsense programs and creative partnerships, we can solve these problems without turning colleges and universities into social service agencies. The answer is not coddling students, but recognizing the barriers to their success and doing whatever possible to help them complete their degrees.

Colleges around the country are beginning to realize this. Over the past five years, the number of programs and services directed at students experiencing poverty has grown. The vast majority focus on addressing food insecurity among students, with campus pantries becoming increasingly prevalent. The College and University Food Bank Alliance, a capacity-building organization, boasted more than 600 member institutions in 2017, up from just 12 members five years earlier. Some institutions have been more proactive, preventing food insecurity by providing food vouchers or food scholarships, or facilitating student access to public benefits such as SNAP.

Other colleges are also tackling housing, transportation, and economic emergencies. For example, Tacoma Community College in Washington state partners with its local housing authority to provide housing vouchers for homeless or housing insecure students. Guttman Community College in New York provides students with free MetroCards so they can get to and from school, and community college students in Los Angeles and Chicago also benefit from subsidized public transportation.

An array of emergency aid programs, including grants, loans, vouchers, and scholarships, is designed to help students cover unexpected costs that might otherwise force them to stop attending college or drop out. Another strategy attracting attention through initiatives like the Working Families Success Network is co-locating services and pairing them with case management and other support. Single Stop, a national anti-poverty nonprofit, has helped community colleges in nine states develop programs that integrate services and a technology-based application to help students access public benefits.

Some colleges have gone further, pushing for institutional change. For example, in the Texas Panhandle, Amarillo College is enacting a poverty-focused agenda embodied by a “culture of caring.” This effort goes beyond a food pantry to focus the college on helping all students complete their programs. A recent case study revealed that rather than instituting a stand-alone program to help poor students—which many colleges create—Amarillo College developed a broader initiative grounded in the general Amarillo community. The No Excuses Poverty Initiative is not located in a single area of campus or left to the responsibility of one team, but rather is integrated into the work of every employee and extends beyond the campus.

This “culture of caring” permeates every aspect of the college, including student-teacher relationships. Faculty and staff received intensive evidence-based training on poverty and its causes, how it affects people and their educational experiences, and what real-life strategies can help. This enabled the work on campus to move beyond stereotypes and anecdotes and focus on data-driven practice. Faculty have even gone so far as to offer rides to class or graduation as a way to make sure there would be “no excuses” for students not to succeed.

Trustees will have an opportunity to raise awareness of basic needs security issues this fall when the U.S. General Accountability Office issues the first federal report on campus food insecurity. The report, which is being developed at the request of Sens. Patty Murray, DebbieStabenow, Ed Markey, and Elizabeth Warren, focuses on what states, colleges, and the federal government are doing to address the issue. In particular, the report will highlight four states: California, Massachusetts, Michigan, and Kentucky. This invaluable document will be useful as college leaders seek to advance changes in state and federal policies to better support their students’ basic needs.

In planning these and other actions, it is useful to have a strong sense of how many students on campus are food and housing insecure and why. Thus, trustees wishing to take action might begin by ensuring that their institutions are surveying students to assess their needs. In addition, they can connect with others working on this issue by using the hashtag #RealCollege on social media.

The current focus on helping more students complete degrees is critical, as few students or their families have time or money to waste. But efforts to support them will be most effective if they start by ensuring students’ basic needs are met so they have the opportunity to fully engage in the classroom and learn the skills needed for the workplace. This work is part of education at all levels—in the United States and around the world. Doing it well requires energy and commitment.

See also: The Real-World Impact of Basic Needs Insecurity: A Conversation with the Chair of the Massachusetts Board of Higher Education