Hit enter to search or ESC to close
Home > Trusteeship Article > On My Agenda: One Board, One Voice

On My Agenda: One Board, One Voice 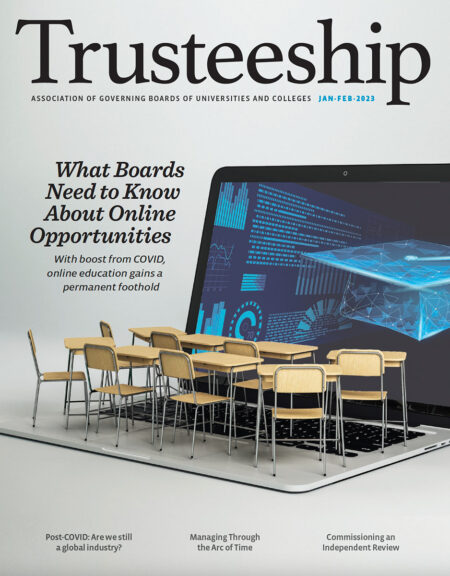 At a conference last year, a colleague of mine—a leader of a state policy making body—told a group of other higher education advocates that leaders should be multilingual. He did not mean that leaders should know English and Spanish or Chinese or Hindi, although having those skills might be beneficial. Rather, he argued that leaders must predicate their use of language, including their vocabularies, points of emphasis, and even the choice of who delivers the message, to the audience in question.

Leaders sometimes need to communicate about issues in different ways in order to achieve strategic ends, with the caveat that the substance of what they say should be consistent, regardless of the audience.

It has always been the case that leaders need to choose the language they use with care. This may be even more important in today’s polarized society. At the same time, even as tailoring what one says to fit a particular audience can be an effective tool for persuasion, doing so can also dilute, or worse, misrepresent what is trying to be conveyed. Simply put, a murky message will only cause trouble down the line, jeopardizing trust in the leadership and goodwill from stakeholders, and resulting in potentially serious consequences for the institution, system, or foundation.

As higher education leaders, board members are sometimes called upon to communicate with and, as appropriate and consistent with board practices, learn from a variety of stakeholders—be they students, faculty, lawmakers, donors, alumni, or other groups that intermingle with institutions. Chief executives sometimes ask board members to accompany them to meetings where having a board voice adds weight and authority to the conversation. The inverse is also true: Campus constituents, families of current students, alumni, and other groups sometimes reach out to board members to share their concerns. In such instances, it is critical that board members listen but do not respond on behalf of the board. It is also critical that board members bring these concerns to the attention of the board chair and the chief executive, who will share this information with members of his or her leadership team. How board members talk about those concerns in the boardroom can also have a significant impact on whether they are taken seriously or ignored.

I have two recommendations for boards and board members who seek to be effective communicators. The first is valuable when communicating externally to other campus stakeholders. The second is important when sharing the views of other stakeholders with chief executives and other administrators.

When the board is called to issue a statement to external audiences, boards speak with one voice to communicate major decisions. The board should coordinate with the chief executive and communications staff to execute a cohesive message plan with talking points and an established spokesperson, often the board chair. It can be difficult for a passionate but well-meaning board member to adhere to the communications plan, especially when they have a platform or relationships with stakeholders that they want to honor. But speaking with one voice, coordinated through the senior administrators, supports important messages and protects the trust that stakeholders have in the governing board. This point is especially true when engaging in crisis communications, where clarity and the choice of wording are critical. I hope you’ll review our FAQs (AGB.org/FAQs) on the board’s responsibilities in crisis communications to learn more.

The second recommendation relates to the responsibility of boards to understand and discuss the perspectives of other stake-holders in the boardroom. In such conversations, board members should not see their role as representing a particular stake-holder group. Rather, the fiduciary duty of loyalty charges board members with retaining their independence, faithfully serving the institution over any other interest. Board members cannot feel beholden to others. They must use their individual good judgment to steward the institution, system, or foundation forward.

With those suggestions in mind, I thank you for your commitment to higher education by reading Trusteeship. In the spirit of renewal and fresh starts in the new year, I trust that you take to heart the perspectives and expertise of the authors and, by doing so, advance higher education in 2023 and beyond.

Book
Principles of Trusteeship:
How to Become a Highly Effective Board Member for Colleges, Universities, and Foundations