Pillars of the Public Good 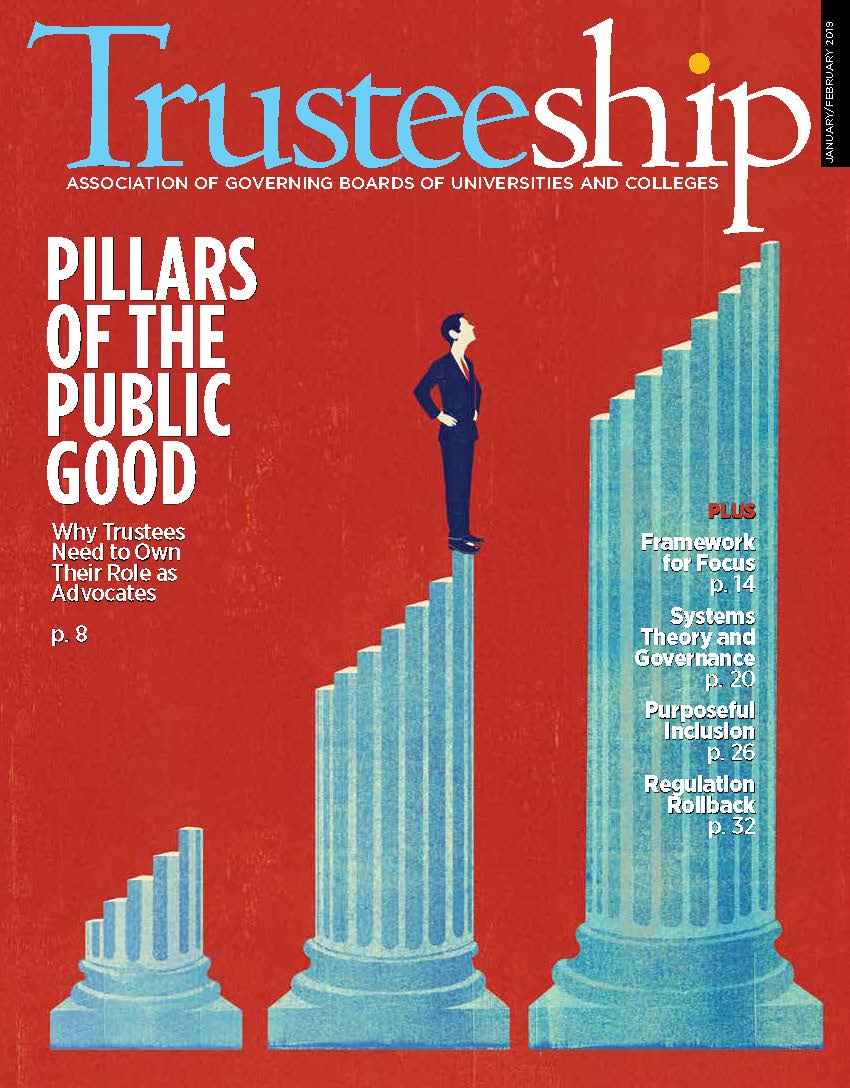 Higher education institutions—and their fiduciaries—have a duty to ensure they are operating in the best interest of the public good and are making a positive return on the public’s investment. Nebulous as the term may be, “public good” is understood to be “the real welfare of the great body of the people,” as James Madison defined it in The Federalist Papers. When applied to education, it is seen as the best guarantee of democracy and a path for equal opportunity.

In these uncertain times, one of the most reaffirming and positive things boards can do is take time to appreciate their respective institutions’ efforts to advance the public good and to affirm public trust. Institutions are making cities, states, nations, and even the world a better place—one person, one program, and one institution at a time. Despite the critical climate, a lot of good is happening for the public’s benefit as colleges and universities prepare engaged citizens, innovate through research, aid communities, and ensure an educated workforce.

When was the last time your board discussed your institution’s contribution to the public good? Were you preparing for renewal of accreditation? Responding to a crisis similar to the ones at Penn State, Michigan State, and the University of Southern California? Reviewing a policy on freedom of speech, as at the University of Virginia, University of Wisconsin, or Middlebury College? Discussing access and affordability—issues occurring at nearly every institution, but none more poignantly than at ITT Technical Institute or Corinthian Colleges? Or perhaps you can’t remember when your board considered this topic.

Arguably, a shared commitment to the public good is the common purpose across all classifications, governance structures, sizes, prestige rankings, and locations of American colleges and universities. But the concept may now be so commonplace that it is rarely noticed—except when a crisis of public trust makes the public good a filter for trustee action.

Historian Gordon Wood noted that aside from “liberty,” American revolutionaries invoked no words more frequently than the “public good.” In the heady days of the nation’s founding, leaders such as Thomas Jefferson, James Madison, and Ben Franklin helped form colleges. As Franklin famously said, “Nothing is more important to the public weal than to form and train up youth in wisdom and virtue.”

Advancing the public good is claimed by almost every postsecondary institution as a fundamental, if not intrinsic, reason for its existence. Consider Harvard University’s beginning in 1636 as the nation’s first college to “advance learning and to perpetuate it to posterity.” The Minerva Project’s founding in 2012 as a wholly new kind of university dedicated to “nurturing critical wisdom for the sake of the world” shows a duty to the public good persists.

A Google search turns up more than 148,000 references to “higher education and public good.” From 2017 to 2018, 6,642 schools, colleges, and universities accepted public funding through Title IV of the Higher Education Act of 1965. Of these, 2,791 were for profit, 1,973 were public, and 1,878 were nonprofit. Every one relies on the investment of public funds for its existence, dependent on the people’s assumption that the missions of teaching, research, and service are for the betterment of all. As President Lyndon Johnson said when he signed the original legislation,
“For the individual, education is the path to achievement and fulfillment; for the nation, it is a path to a society that is not only free but civilized; and for the world, it is the path to peace.”

Much ink and not a little anguish have been spent on debating whether postsecondary education is a public good or a private benefit. Clearly, it is both. Lest we forget the public benefit in a headlong rush to economic competitiveness, employability, and reduced public investment, however, we need to appreciate just what is at stake. When analyzing the actual public investment in postsecondary education, cur-rent, consistent, and accurate data can be very difficult to aggregate. But we can offer an approximation—as a stimulus to a more rigorous accounting.

Whether educating students for employability and citizenship, conducting research to better humanity, or providing services to communities, all but a tiny fraction of institutions dip into the estimated $158 billion that the public annually invests for student aid, program grants, and research through local, state, and federal resources (based on 2013 data for direct public investments in public, private, and for-profit postsecondary institutions). With economic recovery, these investments have only increased in the past six years. In 2017, individual giving to higher education was $19.2 billion, charitable foundations added another $13.1 billion, while corporations and others added more than $11.2 billion. Plus, these foundations and individuals were eligible for tax benefits to encourage their philanthropy. The federal tax benefit alone was more than $35 billion in 2014. State tax benefits and 529 accounts added much more. Despite the complexity of defining accurately and aggregating the various total public subsi-dies, we can estimate (conservatively) that the public contributed at least $236 billion to postsecondary education in 2017.

An estimated 17 million students were enrolled in degree-granting postsecondary institutions 2017. That amounts to more than $13,800 spent on each student per year—a significant public investment in Franklin and his peers’ idea for advancing the public weal.

Yet despite its venerable commonality, the public good rarely emerges on trustee agendas. Public accountability can prod action in the name of the public good, whether addressing inattention to sexual misconduct or freedom of speech, or affordable access to the ladder of social equality.

However, with such a massive investment of resources by the public in higher education, shouldn’t a consideration of the public good be a more frequent and substantive topic of boards’ discussion? In a 2016 Trusteeship article, David Weerts argued that “board members across all sectors can draw on their own passions and civic commitments to help their institutions find their distinctive niche in serving broader societal purposes, going beyond traditional notions of service, and more deeply engaging in community.” Why don’t boards do so more often?

MISSION AND OTHER PUBLIC DECLARATIONS

Almost every college and university has some reference to the public good, to community engagement, or to preparing educations citizens in its mission, vision, purpose, or values statements. Some systems, such as Florida, address this duty as a state: “Boards of trustees exist to represent the general public. They are responsible for balancing and integrating the wide variety of interests and needs into policies that benefit the common good and the future of their region.” Other public institutions also explicitly acknowledge the public or societal common good. Portland State
“leads the way to an equitable and sustainable future . . . for all.” Foothills Community College commits to “sustaining and enhancing a democratic society.” The University of Michigan’s imperative is “to serve the people.”

Private colleges and universities similarly attend to the public good. Consider Antioch University’s mission “to empower students with the knowledge and skills
to lead meaningful lives and to advance social, economic, and environmental jus-tice.” Princeton University expresses “a pervasive commitment to serve the nation and the world.” Tuskegee University will “produce public-spirited graduates who are both competent and morally committed to public service.” Even some for-profits state a commitment to the public good. Walden University says it will “promote positive social change,” and the University of Phoenix campuses aim to “provide leader-ship and service to their communities.”

Even when colleges and universities do not explicitly mention the public good, the trustees often acknowledge a fiduciary responsibility to society for several reasons. State institutions are created, regulated, and partially funded by the public. Nonprofits enjoy tax benefits as public charities. Some for-profits are public benefit corporations with a dual bottom line to shareholders and the public good.

Boards must adhere to several basic tenets that define a fiduciary: The Duty of Care—requires full attention to one’s duties as trustee, setting aside competing personal or professional interests insofar as possible; The Duty of Obedience—refers to trustees’ obligation to promote the mission of the organization within legal limits; and The Duty of Loyalty—requires board members to put the interests of the trust before all others.

As do most legal scholars, Legon added two widely acknowledged duties: The Duty to Act in Good Faith and The Duty to Serve the Public Interest.

The policies of the Antioch board are typi-cal in their acknowledgment of the broader fiduciary duty: “In exchange for favorable tax treatment associated with its non-profit, tax-exempt status, there is also an obligation for the institution to act for the public good. Consequently, as fiduciaries, members of the Board of Governors owe duties to both the corporation and to the general public which we serve.”

In its opening sentence about boards and governance, the Association of Community College Trustees states unequivocally that “effective boards form a cohesive group able to articulate and represent the public inter-est.” Representative of the statements of many national associations, the American Association of University Professors and the Association of American Colleges and Universities issued, as early as 1940, a joint statement on academic freedom that was based on the premise that “institutions of higher education are conducted for the public good.”

But even when boards ignore—or forget—their duty to the public good, whether a fiduciary duty or a moral and ethical imperative, periodic checks and balances usually prompt at least an occasional discussion. One of the more important is accreditation.

Increasingly, specialized accreditors are also asking for evidence of how programs address the public good. ABET, the accreditor for engineering and related disciplines, for example, includes in its statement of values that, among discipline-specific capabilities, graduates must also anticipate “the welfare and safety needs of the public.” AACSB Inter-national’s requirements for accrediting business programs contain a proviso for social responsibility: “The school must demonstrate a commitment to address, engage, and respond to current and emerging corporate social responsibility issues.”

As the responsible party for institutional integrity, trustees are expected to approve institutional statements for such reviews. However, do trustees discuss these state-ments in detail or with a genuine interest in the institution’s actual contribution to the public good? Despite some notable differences among institutions’ governing boards, boards and individual trustees should guide their institutions and hold them accountable for the public good.

Many institutions are, in fact, making noteworthy investments in the public good. Their trustees, in turn, are directing institutional resources to support public work—which often engages alumni, community members, governmental organizations, and corporations as collaborators.

For example, a growing number of colleges and universities are taking up “grand challenges,” often stimulated by professional associations or institutional membership organizations, foundations, or nonprofit agencies—but always at the choice of the institutions and their leaders. From programs such as Indiana University’s $300 million health and environmental research initiatives to the State University of New York at Oswego’s focus on “fresh water for all,” institutions large and small, local or international, are seeking ways to concentrate faculty, students, and institutional social capital on addressing the biggest issues facing society. It is the kind of response Madison, Franklin, and Jefferson anticipated.

Trustees are charged with governing key institutions in the American milieu. They—along with administrative leaders, faculty, and staff—do this for the sake of students and for the greater good. Taking time to recognize existing efforts for the public good and to consider means for improvement is well worth the effort. In honoring society’s trust by law and tradition, trustees will be better prepared to do their best work in times of crisis and normalcy alike. And in doing so, they will ensure the best future for all of their constituents.