The Business of Higher Education 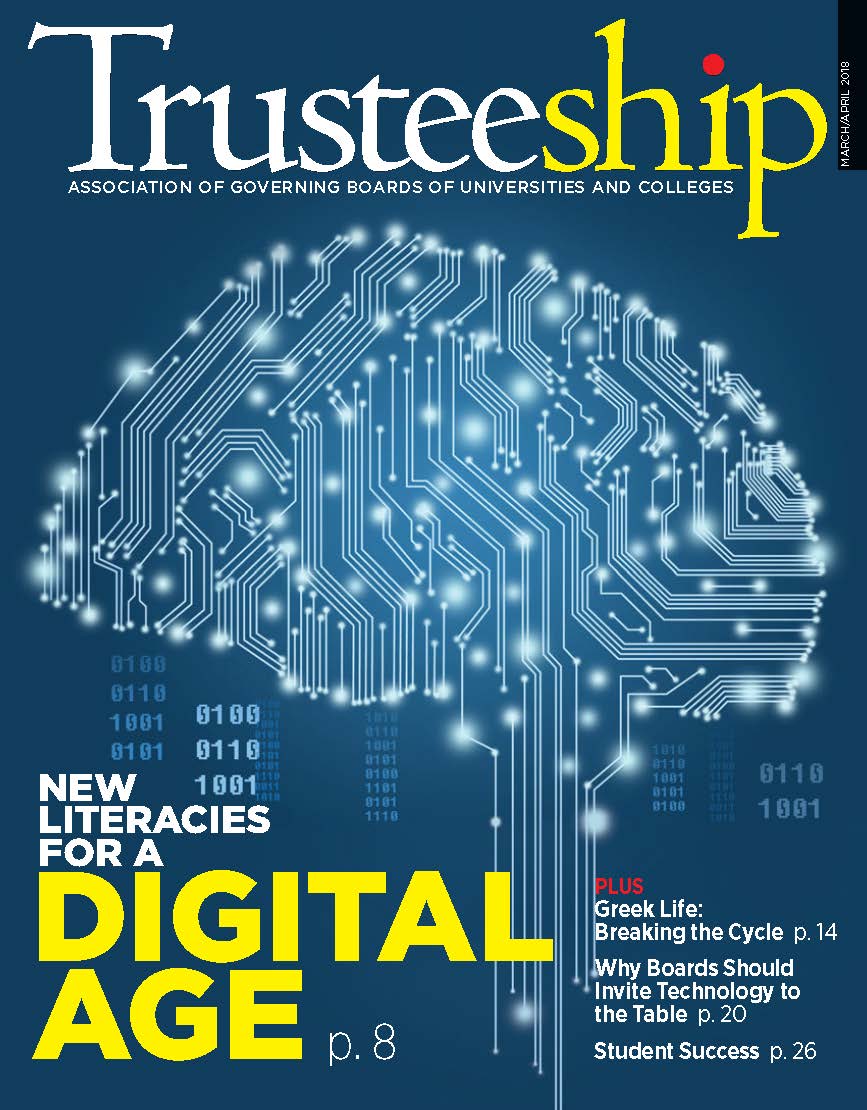 Public skepticism about the value of higher education and restrictive policy decisions at the state and federal levels are fueled in part by the sector’s opaque business model, where the fundamental forces of supply and demand don’t always seem to apply. Yet college applications remain high as students seek the skills needed in a competitive, global economy, and the return on investment—across many measures of individual and societal well-being—is inarguable.

This article is excerpted from The Business of Higher Education, the first briefing in AGB’s continuing Guardians Initiative™: Reclaiming the Public Trust. A national campaign to marshal the voices of college and university governing boards on behalf of higher education, the Guardians Initiative is providing tools and information to explain the unique historical role of higher education in the United States—and why that legacy needs to advance.

Much of the higher education sector uses an unconventional business model that sets it apart from the rest of the national economy. The price it charges for its core product—higher education instruction— only partially covers the costs of providing that product. Many of the significant issues that animate policy discussion in higher education today—assertions that college costs more than it should, doesn’t reach students beyond those in the an elite upper strata of society, saddles graduates with unsustainable levels of debt, fails to prepare students for future employment opportunities, and devotes too many resources to research and scholarship at the expense of teaching—reflect a lack of transparency in the way colleges and universities price their product and cover their costs.

This opacity is aggravated by higher education’s adherence to a largely 20thcentury business model that causes it to miss cues from the public, policymakers, and other audiences about their current dissatisfactions with colleges and universities. Board members can enrich public conversations about higher education by contributing to a broader understanding of today’s business model and envisioning how it might evolve.

All businesses in this country organize their finances around revenues and expenses. Opportunity for growth results from manipulation of three variables: increasing demand, adjusting prices in response to competitive market forces, and containing costs. The late Gordon Winston, professor of political economy and director of the Project on the Economics of Higher Education at Williams College, observed that confusion over the cost to consumers of higher education arose from a simple fact: “Colleges and universities, as firms, are highly unconventional in their sources of revenue, their production processes, and their institutional values.”

Colleges and universities sell a product that, at least since the middle of the 20th century, has been in high demand. Underlying higher education is an astonishing value proposition, one that is easy to support yet that the sector’s critics largely overlook. While the cost of attending college is indisputably high, so are the benefits to be reaped by making the investment in higher education. This translates into persistently high demand for higher education—a phenomenon that helps to explain heightened concern about college costs as well as why tuition prices have not been very responsive to that concern.

Leading economists like Walter McMahon, professor emeritus at the University of Illinois, assert that the United States underinvests in higher education because we underestimate its benefits both to individuals and to society as a whole. Higher education, he argues, efficiently creates human capital that improves communities and contributes to the economic well-being of the nation over the course of graduates’ entire lives. College graduates enjoy better health, longer lives, and greater degrees of individual and professional satisfaction that are directly attributable to higher levels of education and increased earning capacity. They also use the skills learned in college to foster democracy and human rights, as well as to accelerate technological advancement. Greater numbers of college graduates also reduce economic inequality and lower the social costs of welfare, medical services, and prison incarceration.

Yet a disturbing undercurrent runs through recent reports on the public’s perception of higher education’s value. Opinion research by Public Agenda shows Americans were substantially less likely to agree that college is necessary in 2016 than they were a decade prior.

The argument that college is worth a high cost has become less persuasive over time. This is at least in part due to public perceptions that students who start but do not complete college come away with debt, forgone earnings, and little material benefit. In other words, going to college represents something of a gamble, with a risk of loss. Yet at any level—associate, baccalaureate, and graduate—acquiring a degree is a prudent investment.

Most Americans are aware that the average published price of attending college has jumped sharply over the last several decades. Focusing on the average obscures the vast range of published prices across some 4,000 diverse colleges and universities, and yet it is common knowledge that the average has increased. Since 1974, tuition and fees have gone up, in inflationcorrected dollars, by 300 percent at private colleges and even more—400 percent—at public institutions.

In the minds of policymakers, journalists, and other opinion-shapers, no higher education issue has more of an impact on public discourse than the rising cost of college tuition and fees. It is important for board members, as community leaders, to appreciate that perception—and also to understand and articulate some of the complexities underlying these numbers.

General subsidies: The first complexity— and perhaps the most widely misunderstood aspect of college and university pricing—is that tuition payments from students make up only a fraction of operating revenues at most of the nation’s nonprofit colleges and universities. The amount any student pays in tuition, even one who pays the full sticker price, is less than what the institution expends to educate that student. Other sources of revenue—among them state subsidies, donations and gifts, and income from endowment—make up the difference.

Published versus net prices: A second complexity arises from the distinction between the published price—the tuition the institution’s governing board approves and that appears in compliance reporting to the government—and the much more significant net price that a student actually pays, which is calculated by subtracting institutional grants awarded to individual matriculants from the published price. Tuition discounts are far steeper and advantage a far greater proportion of students than many people realize.

While the published price of a year of college has increased substantially over the last two decades, the median net price has increased at a far slower rate.

CONTRIBUTING TO DISCUSSION OF THE HIGHER EDUCATION BUSINESS MODEL

Trustees are uniquely positioned to not only respond but also contribute to public understanding of the demand, price, and cost distinctions that shape the business of American higher education. There is a story to tell, and whether in the company of friends, community leaders, or others, board members should be prepared to discuss a few key propositions in an informed way:

1. The cost of attending college is not as high as many people believe. First, a vast range exists in the published prices of American colleges and universities, notwithstanding the relatively high prices of the most prestigious and selective among them. Further, press and partisan politics have done little to help explain substantial differences between the cost of educating a student, published tuition, and the net tuition students pay. The public generally is not aware that students receive all the subsidies and tuition discounts that they do.

2. The value of a postsecondary credential has never been higher, as reflected by the record number of young adults enrolling in the nation’s colleges and universities. While earnings for bachelor’s degree recipients have fallen in real terms, they have fallen far less than for those without a college education. Even as the cost of attending college has increased, the earnings premium for American college graduates has remained among the very highest in the world. And the advantages go far beyond earnings: college degrees are associated with an array of qualityof- life benefits for individuals, communities, and the larger American society.

3. Colleges and universities are highly complex from a business perspective, for understandable reasons. Today’s college experience is not your mother’s or father’s college experience. Students can now attend institutions offering more academic choices, a greater range of co-curricular enrichment, more counseling and support services, broader residential and dining choices, and more career relevance than ever before. The net result is that, while students and families largely do not understand how, colleges continue to find ways to maintain and enhance their value and respond to growing market demands.

4. Colleges and universities—far from being oblivious to the problem of rising tuition—are implementing reforms designed to improve cost transparency and keep college affordable. While government regulation has played a role, much of the improvement in affordability stems from the fact that today’s higher education leaders are aggressively responding to the public’s concern about the cost of attending college. They are rethinking their business practices and identifying their efficiencies. They are cutting administrative expenditures, renegotiating contracts, reducing energy consumption, and refinancing debt. They are using data analytics to obtain intelligence to help enhance productivity and make good budgetary decisions. They are pursuing partnerships and cooperative agreements, and where appropriate, outsourcing programs and services. More work is needed, but today’s cost of attending college is actually the result of serious efforts by college and university leaders to contain it.

Finance and the Business Model