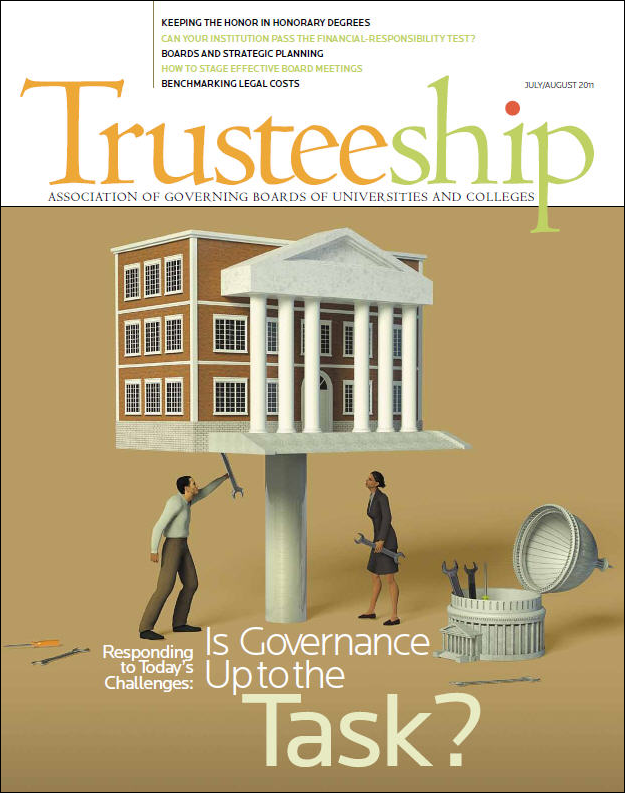 Responding to Today’s Challenges: Is Governance Up to the Task?
By AGB

How can boards be of the most value as they sit at the intersection of institutional aspirations and society’s needs? At AGB’s National Conference on Trusteeship, Ray Suarez, senior correspondent at the PBS NewsHour, led a special panel that examined many of the key issues.

Foundation Boards and Fund-Raising Teams: A Win for Higher Education
By Michael J. Worth

As public institutions across the country face increasing cuts in state appropriations per student, many are turning to institutionally related foundations for support. The fund-raising work of foundation boards is becoming more vital than ever.

Keeping the Honor in Honorary Degrees
By Robert M. O’Neil

Most American colleges and universities honor alumni, donors, and others through not only degrees, but also named buildings, chairs, and other forms of recognition. Recent controversies, however, suggest that boards should think twice before bestowing such honors.

Without strong backing from their boards, faculty and administrations may not have the stamina or power to ensure that the core values of rigorous free debate and inquiry are upheld.

Will Your Institution Pass the Financial-Responsibility Test?
By Kent John Chabotar

The Department of Education regularly tests the financial ability of colleges to administer federal student-aid programs. Boards should understand how the test is constructed and how their institution can best respond.

View from the Board Chair
Boards and Strategic Planning
By David W. Miles

A Question For…
Mark A. Emmert
What Does the Future Hold for Financing College Athletics?