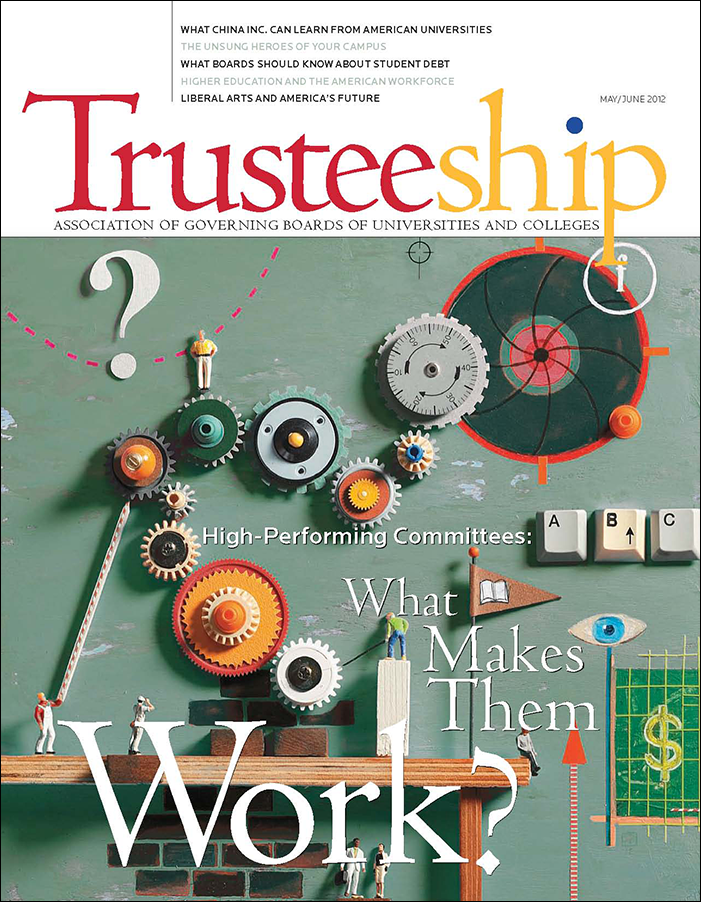 High-Performing Committees: What Makes Them Work?
By Stephen G. Pelletier

As governing boards have become more sophisticated and polished in their oversight of colleges and universities, they have also become more intentional in the way they organize themselves to meet their missions.

An ever-growing share of jobs are reserved for workers with postsecondary education and training. Higher education is no longer just the preferred path to middle-class status. Today, it has increasingly become the only path.

What China Inc. Can Learn from American Universities
By James Fallows

China’s ability to develop the right kind of university system, with the right governing structures, will tell us a lot about the role it will play in the world. For now, the task is harder than most outsiders assume.

Higher Education and the American Workforce
By Holiday Hart McKiernan

America’s long-term economic recovery relies on getting more high-quality degrees into the hands of a larger, more diverse pool of graduates. Boards that drive for major improvements in higher education will lead the way in a movement the nation can’t afford to postpone.

In this opinion piece, the author describes what he contends are flaws in the American higher education system and how they relate to the responsibilities of the boards of colleges and universities.

Focus on the Presidency
Engaging Governing Boards in Comprehensive Internationalization
By Eileen B. Wilson-Oyelaran

View from the Board Chair
Liberal Arts: Creating and Re-creating America’s Future
By Jeffrey B. Trammell

A Question For…
Sandy Baum
What Should Boards Know about Student Debt?