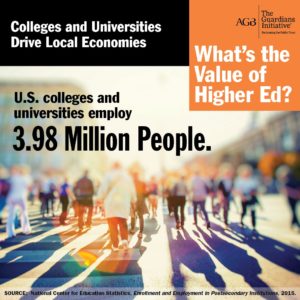 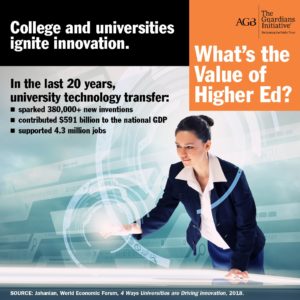 Colleges and universities ignite innovation. From 1996 to 2015, technology transfer from universities sparked development of more than 380,000 new inventions, contributed $591 billion to the national GDP, and supported 4.3 million jobs. In fact, 9 out of 10 U.S. patent holders have bachelor’s degrees, and nearly half have professional or doctoral degrees. 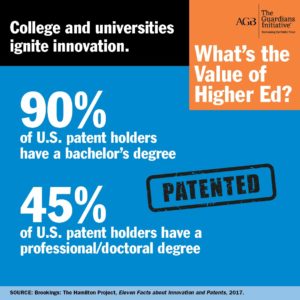 Colleges and universities fuel the knowledge economy. With the world’s shift from an industrial economy to a knowledge economy, postsecondary education is key. Since the Great Recession, 99 percent of jobs created have gone to employees with more than a high school diploma. And as predictions forecast that 65 percent of U.S. jobs will require postsecondary education or advanced training by 2020, the nation may face a shortage of five million college-educated workers needed to keep the economy strong. 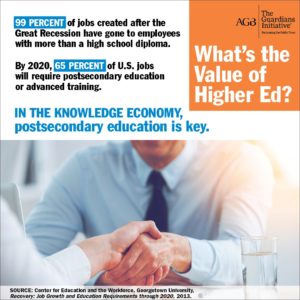 Colleges and universities drive economic development. Here’s how: About one million international students study at American colleges and universities over the course of a year, contributing $36.9 billion to the U.S. economy and supporting more than 450,000 jobs through expenditures on higher education, accommodations, dining, retail, and transportation. 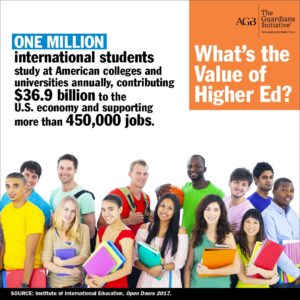 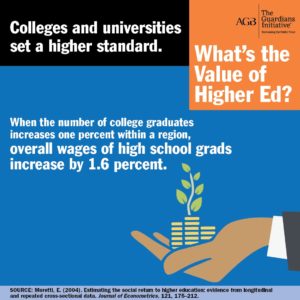 Use these resources to craft messages, op-eds, and remarks to share with colleagues, campus constituents, the media, and other audiences. Also, follow @AGBGuardians and visit the Guardians homepage for other useful information on higher ed’s return on investment.