Throughout the history of American higher education, colleges and universities have played a key role in not only providing students with the foundation they need to excel individually, but also in preparing citizens who contribute to civic life. Today, research proves college graduates get involved in politics and serve in their communities at greater levels than their peers who do not pursue college. Higher education cultivates engaged citizens. Our nation needs to hear this news. And as advocates for higher education, trustees should play a more active role in spreading the word. 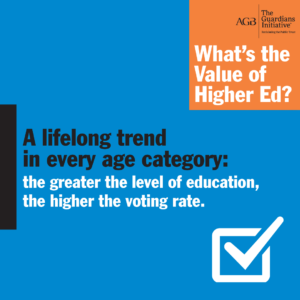 College graduates turn out to vote. This is a lifelong trend in every age category: the greater the level of education, the higher the voting rate. In the 2014 state and federal elections, the voting rate among citizens ages 18 to 44 who had a bachelor’s degree (or higher) were more than DOUBLE the voting rate of citizens who attended only high school. 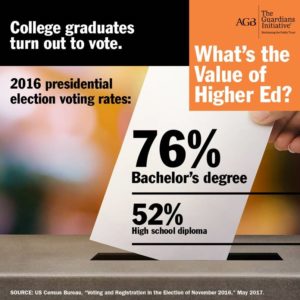 This trend also reflects a widening margin over time. In the 1964 presidential election, there was only a 12 percent difference between the voting rates of citizens with only high school diplomas (76 percent) and those with college degrees (88 percent). By the 2016 presidential election, the gap had doubled to 24 percent. Just 52 percent of those with only a high school diploma voted, while 76 percent of college graduates headed to the polls.

Closer to home, 75 percent of college graduates vote regularly in local elections. Of those limited to a high school education, just 50 percent headed to local polls. 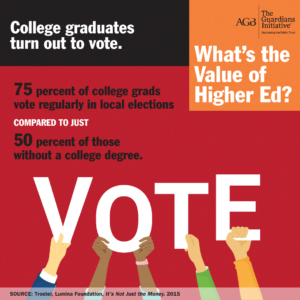 College grads are more willing to run for public office. Pew Research indicates only 27 percent of U.S. citizens have earned a bachelor’s degree, yet almost half of all people who run for public office at the local, state, and federal level have a college degree. Candidates who report having a high school diploma as their top level of education, however, comprise barely one in five of those who run for office.

College graduates get engaged in political life. Citizens who earn college degrees are more apt to discuss politics at least a few times a week, contact public officials to express their opinions, and make purchasing decisions based on social or political values. They also get more involved at the grass roots level. Individuals with bachelor’s degrees are three times more likely to attend civic meetings that discuss community affairs as those who did not pursue college. 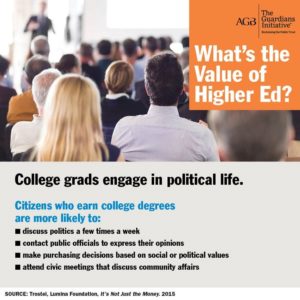 College graduates give back to the community. While in college, more than 70 percent of students lend a hand with some sort of service efforts. The trend continues later in life, as college grads volunteer within their communities at double the rate of high school graduates. What’s more, college graduates also have greater involvement in school, community, and religious organizations, and they are three times more inclined to assume leadership roles within these groups. 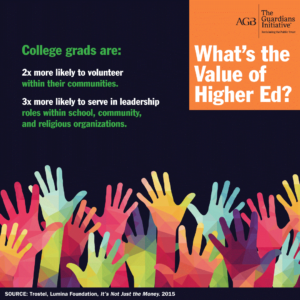 College grads are committed neighbors. According to U.S. Census Data, college graduates are more likely to have worked on a community-based project than those who have not attended college. This commitment creates connections. As a result, 64 percent of bachelor’s degree holders say they trust their neighbors compared with 51 percent of high school graduates.

Use these resources to craft messages, op-eds, and remarks to share with colleagues, campus constituents, the media, and other audiences. Also, follow @AGBGuardians and visit the Guardians homepage for other useful information on higher ed’s return on investment.