A Winter of Discontent

Tax Policy, Trust, and the Future of Higher Education 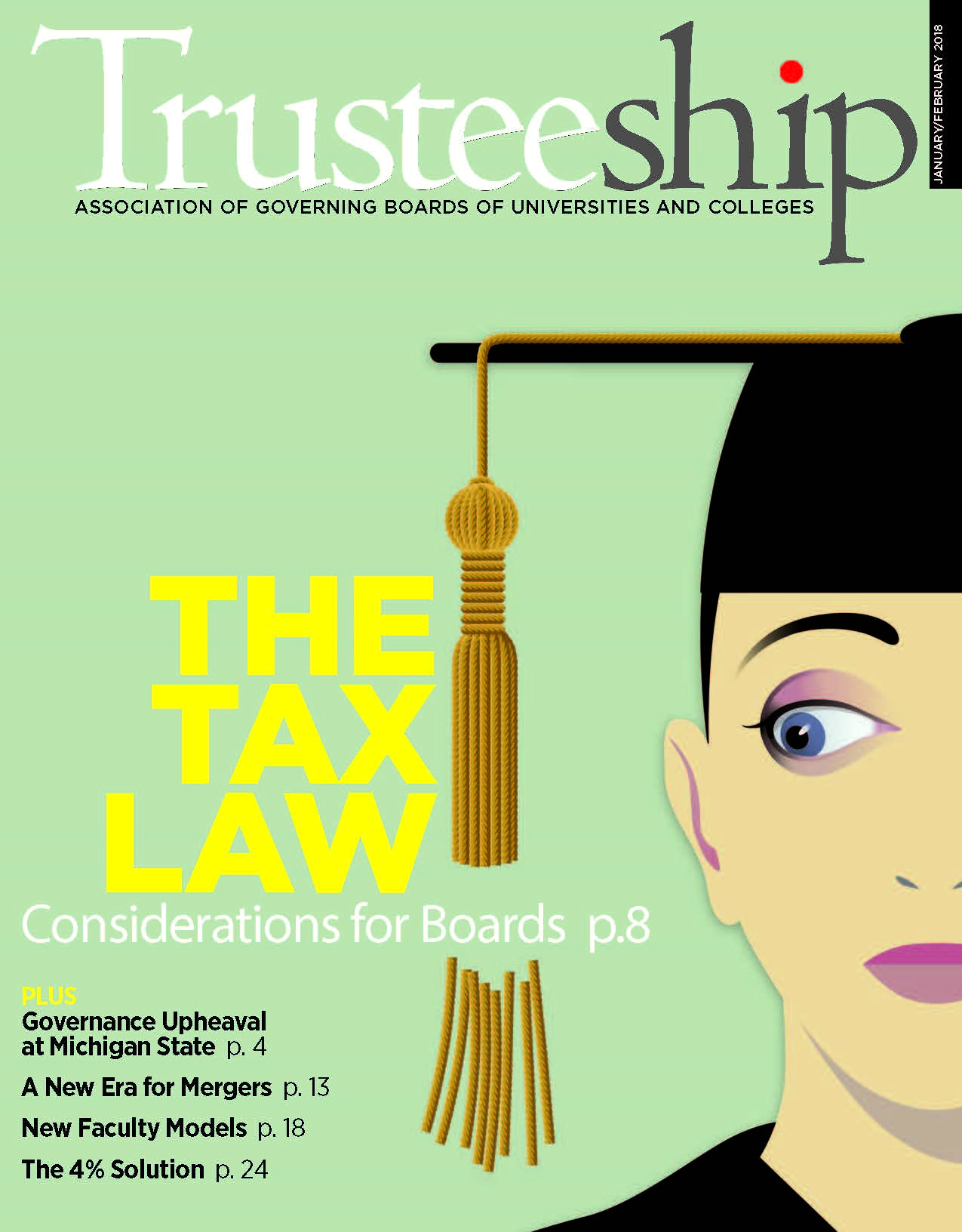 If ever a year could be considered a watershed for our nation’s colleges and universities, 2017 might hold that distinction. Regular news accounts of campus unrest and speech issues, combined with several influential public opinion polls that showed declining levels of trust in higher education, provided a steady diet of uncertainty—and, in some cases, disbelief— from a sector that wants to see itself as an unquestioned public good.

Perhaps the unkindest cuts of all coming to higher education were those included in the federal tax bills introduced in the U.S. House and Senate last fall. Although there were warning signs such as tax subcommittee hearings on college costs and a joint study of university endowments by the House and Senate tax committees, it is fair to say that the variety and depth of provisions that would do damage to American higher education and its students caught colleges and universities by surprise.

When the House Ways and Means Committee bill was unveiled in early November, advocates were alarmed that its most troublesome provisions would dramatically increase the cost of college, prevent private institutions from accessing tax-exempt financing, penalize endowments, reduce charitable giving, and decrease support for higher education overall. Here is just a sample of some of the House provisions:

By the time the House and Senate conference committee began its official deliberations in December, strong, targeted advocacy, assisted by “Dear Colleague” letters from key members of Congress, helped prevent many of the most punitive elements of the House and Senate bills from being included in the final negotiated Tax Cuts and Jobs Act, which President Trump signed into law. However, several problematic tax changes for higher education— some in modified form—survived the conference committee and are now part of the new law. Among the provisions are limiting state and local tax deductions to $10,000 and doubling the standard deduction with its expected dampening impact on fundraising.

The law imposes an endowment excise tax on private colleges and universities with 500 students or more and with assets of at least $500,000 per full-time student. This is expected to affect some 35 institutions, some of whom may be private liberal-arts colleges whose limited enrollments push them over the $500,000 per student mark. Other aspects of the law that will hurt institutional bottom lines establish a 20 percent excise tax on compensation for any of the five highest-earning employees whose compensation exceeds $1 million and disallow the use of tax-exempt bonds for the advance refinancing of outstanding tax-exempt debt.

Admittedly, Congress and the president needed to find dollars somewhere to prevent the Tax Cuts and Jobs Act from ratcheting up the national debt, currently at $20 trillion and projected to reach $30 trillion by 2030. Colleges and universities can be relatively easy targets for grabbing revenue compared with entitlement programs or other more politically charged expenditures. While some of the worst ideas put forward were turned back when higher education rallied its employees and supporters, the weight of the draconian measures directed at higher education over the course of the tax saga seems to reveal an animus that is not just simmering but boiling over.

A spate of public opinion polls over the past year helps explain the attitudes of many in Congress about the higher education enterprise. A Wall Street Journal/NBC News survey found that just 49 percent of Americans believe a four-year degree will lead to a good job and higher lifetime earnings. Only 25 percent of respondents in a New America poll believe that higher education is fine the way it is, and only 3 percent of millennials believe the same. Most disturbing, a Pew Research poll found that 58 percent of Republicans and Republican-leaning independents believe that colleges and universities have a negative effect on the country, up from 45 percent the year before. Interestingly, a recent NPR/PBS NewsHour/Marist poll showed that 68 percent of respondents had little or no confidence in Congress either.

Stories in the popular press about overwhelming student debt, graduates living in their parents’ basements, and free speech being constrained on campus have undoubtedly contributed to these findings. Such narratives are typically based more on the exceptions than the rule, but they nonetheless capture public attention. Moreover, the general decline in trust in society’s major institutions—government, business, the media, religious organizations—has swept in higher education.

As Congress gears up for the major policy debates that will shape the future of our campuses in the coming year through reauthorization of the Higher Education Act, how might we rebuild trust in the central value proposition of postsecondary education?

Many individuals, institutions, and associations in the higher education community will have to step up to answer that question. But the sector will not be successful in restoring confidence unless it involves a group whose voices have been largely absent from conversations about value—the 50,000 trustees of the more than 4,000 degree-granting institutions across the United States. The reason is that trustees have a unique status, recognized stature, and societal commitment.

Lay governance of higher education is an American model, envied yet not often replicated in other nations. Citizens who serve on the boards of colleges and universities in the United States bring widely varied backgrounds and perspectives that help keep the institutions attuned to the world beyond the campus. They are “border runners” at the intersection of town and gown. They know more about the institutions than anybody who does not work at them. At their best, they are highly interested in the workings of the academy, and at the same time disinterested in the sense that they are not beholden to it. As such, they can serve as informed, “loving critics” in the interest of the public trust, fulfilling a vital fiduciary role that no other individuals or entities can take on with the same competence.

Whether appointed by a governor, elected by voters, or recruited by sitting board members and their president, trustees generally are tapped for the task because they are successful and prominent in their professions and communities. They are sometimes sought after for a range of important assignments in their states and nationally. They are often people of influence, serious actors in networks where their opinions are valued and make a difference.

When the board of regents of the University of Wisconsin System made a tough decision during Kevin Reilly’s tenure as president, he might hear from an angry Wisconsin resident demanding that he fire those regents or cut their salaries. Of course he had to explain that as president, he did not hire or fire the regents and they received no pay for their service. The point is that good trustees take on a heavy load of truly significant work without remuneration because they believe passionately in the value of higher education—for the students who earn their degrees, the society that benefits from a highly knowledgeable and skilled workforce, and the university research that propels new jobs, industries, and cures.

Because of their unique status, stature, and commitment, trustees can speak about the higher education enterprise with a credibility that no other class of concerned citizens can match. That is why AGB launched its ambitious Guardians Initiative™, which encourages and empowers board members from public and private colleges and universities to become more vocal public advocates of the value of American higher education.

This AGB campaign is recruiting trustees to work with their presidents, and their institutional communications and university relations offices, to tell the story of the positive impact of higher education on its graduates and society. Based on clear evidence and personal testimonies, AGB will help trustees craft and deliver messages about higher education’s proven value as an economic, social, and cultural engine that advances the nation’s democratic ideals. The goal is to have trustees engage with their networks of influencers, and through these networks help reverse negative public opinion expressed in the polls cited above and during the tax debate.

AGB is developing a toolkit of templates and samples of briefing papers, op-eds, talks to business and civic groups, podcasts, media interviews, legislative testimony, and social media to support trustees who become active in the campaign. All of these can be customized as desired to fit the geographical, political, or cultural environment of a trustee’s institution. For more details about the initiative and how to get involved, see the Guardians website at agb.org/projects/the-guardians-initiative-reclaiming-the-public-trust/.

In John Steinbeck’s 1962 Nobel Prizewinning novel, The Winter of Our Discontent, Ethan Allen Hawley succumbs to the temptations of wealth, power, and prestige. Has higher education entered a spiritual crisis of its own? We need to acknowledge higher education’s failings and inefficiencies, explain how we are addressing them, and at the same time proclaim its vital importance to our democracy and all its people in a globally competitive knowledge economy. Good trustees now are good stewards of their institutions. Good trustees in the future, for the sake of their individual institutions and the American commonwealth, will need to become persuasive, trusted spokespeople for the worth of the entire enterprise.