American Democracy Is in Jeopardy 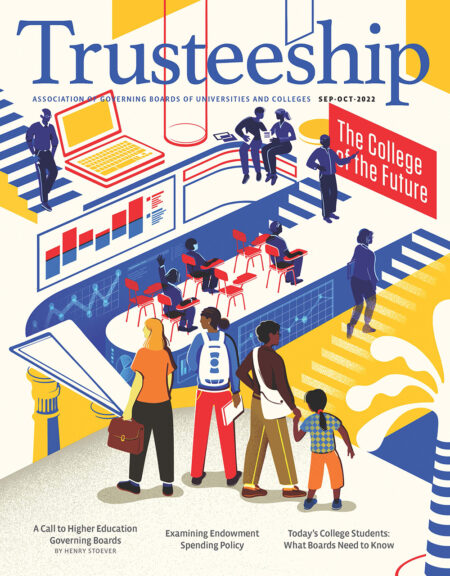 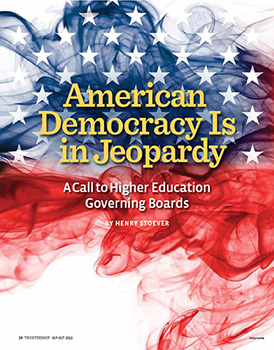 American democracy and our nation’s role as a beacon of hope and leader of the free-market economy are in jeopardy. Our place in the world has been advanced immeasurably by world-class colleges and universities that graduate an educated citizenry—one that is vital for participatory democracy, research and innovation, and well-prepared talent. But sadly, these qualities that sustain American democracy are in danger due to three overarching threats: growing political intrusion into higher education, insufficient preparedness to address demographic shifts impacting campus communities, and public skepticism regarding the value of higher education. Left unaddressed, these threats will weaken our colleges and universities and severely limit their ability to serve our country and its strategic interests.

Higher education governing boards and communities can address these threats, and they should do so with urgency to ensure the health and vitality of American democracy and our country’s economy. Specifically, college and university governing boards must provide strategic leadership—in collaboration with chief executives, administrative leadership teams, and faculty—to drive lasting, consequential change to cultivate an informed, educated citizenry prepared to fully participate in democratic opportunities and create a thriving society and economy.

Boards and institutions have the most powerful means to reaffirm that a well-educated population is a national imperative and align the outcomes of institutions with this need. For example, boards should make it a priority to address the decline in the number of students who now enroll in and graduate from college. To be blunt, governing boards cannot continue to conduct business as they have. Rather, they must insist that the institutions they serve develop strategies that will retain and graduate more students prepared to participate in our democracy, society, and workforce. Failure to do so will erode not only our campus communities, but also the vitality of our country to compete on a global scale.

Governing boards also have a duty to protect the tenets and values of higher education. Thus, boards need to stand firm to protect academic freedom and to establish policies that foster the intellectual development and free expression of students, including the ability to present, defend, and question ideas from a broad range of perspectives. This is essential if college graduates are to acquire the skills to think critically and creatively and to work effectively with others— abilities that are central to the health of a participatory democracy, a thriving economy, and an inclusive society. Boards also play a critical role in supporting and protecting the free expression of faculty and research that is aligned with institutional missions—even when it is controversial. AGB’s recent statement, “Freedom of Speech and Diversity on Campus: Considerations for Board Members and Chief Executives,” emphasizes this point even as it compellingly describes the tension on campuses today between a commitment to free speech and a desire to create a welcoming environment for all students.

Political Intrusion into the Academy
Political intrusion into the academy is negatively influencing the future of American democracy, our society, and our economy because some politicians are tampering with the basic tenets and values that have made American higher education the envy of the world.

Since the Guardians report was issued in 2019, the country has witnessed unfortunate new divisiveness in many sectors, including higher education. For example, some governors, state legislatures, and other elected officials are infringing on the independence and autonomy of colleges and universities, limiting academic freedom in teaching, learning, and research, which taken together are the hallmarks that have led American colleges and universities to make significant contributions to our society and the world.

It is time for boards to face the essential question: Should they be passive in the face of political intrusion or should they challenge it? And if the latter, how can they do so productively?

Some points to consider:

Demographic Shifts
Demographic shifts are influencing the outcomes of higher education and leading to a reduced number of graduates, weakening the future of American democracy, our society, and our economy. Boards must understand the facts of demographic change and seek ways to adapt and increase the number of citizens who benefit from higher education.

One way to counteract this decline is to increase the college-going rates among cohorts of students who have traditionally been underserved by higher education. American colleges and universities—including community and technical colleges, regional public universities, liberal arts colleges, minority serving institutions, and research-oriented universities—are a critical pathway to social and economic mobility for many students, especially those from the lowest income quartile. For many institutions and for the country as a whole, these are the students of the future.

Despite some early progress in closing opportunity gaps, we need to find additional and more effective ways to encourage and support low-income students, students of color, and older and first-generation students so they can pursue and complete a postsecondary education. To achieve this, many of the operational practices of colleges and universities may need to be redesigned to reflect the rapidly changing needs of American students.

Compounding these challenges are harsh realities that impact many of today’s students. From food and housing insecurity to physical and mental health challenges, job loss, financial stresses, social disconnection, or lack of belonging, these new realities require the attention of institutional leaders as well as additional resources from often already-constrained budgets. Determining the appropriate allocation of resources is ultimately a board responsibility.

Boards should also evaluate institutions that have developed strategies to influence the health of American democracy favorably while simultaneously addressing demographic realities. For example, many colleges are already working to retain and graduate more students while also encouraging more adults with some college but no degree or certificate to reenroll and graduate. According to the National Student Clearinghouse, the nation’s six-year college completion rate is 62.2 percent. If we could increase this rate by at least 10 percentage points, or more, substantial benefits would accrue to students, colleges, universities, and to our democracy, society, and economy.

Addressing the demographic shifts of our nation while also strengthening American democracy will take a concerted effort by federal and state governments, higher education governing boards, and college and university chief executives, administrators, and faculty to capitalize on this opportunity. Part of the solution may be for board members and campus communities to advocate for increased student financial grant aid such as the efforts to #DoublePell. Further, more deliberate and effective campus outreach to and partnerships with K-12 schools to increase student interest in and preparation for college will influence favorable outcomes.

Earlier generations of college graduates could expect to lead prosperous lives, but today, with the cost of four-year degrees absorbing ever larger percentages of family income, many students and parents are demanding a clear “return on their investment.” Students and parents seek evidence, even prior to enrollment, that the money they will invest in college will lead to a well-paying career and economic security. And employers also increasingly question the need for job applicants to have college degrees. Some suggest that technical skills-based certificates or credentials are credible substitutes, a misguided assumption that threatens the primary offering of colleges and universities.

Although technical skills are a useful part of job preparation, education is a lifelong journey meant to cultivate the life of the mind—to learn to think critically and creatively, to evaluate analytically, to work collaboratively and effectively in diverse groups, and to understand and communicate perspectives with sensitivity and passion. Beyond the intrinsic importance of these intellectual and behavioral skills, multiple surveys of business leaders, the American Association of Colleges and Universities, and the Business-Higher Education Forum confirm that these abilities are precisely what employers seek in new employees.

Given these challenges and the vital need to graduate more students, boards and their chief executives should reflect upon their fiduciary duties and consider whether strategic transformations may be required for their boards, leaders, and institutions. The status quo is not enough to ensure student success for all students, nor will it ensure long-term vitality for our colleges and universities.

Conclusion
A well-educated population is a national imperative. Unfortunately, the combination of inappropriate intrusion of politicians into higher education; of fewer well-prepared college graduates; and of the increasingly–and sometimes justified–negative perceptions of higher education’s value proposition, are threatening American democracy, our society, and our economy. If not addressed, the outcomes of American higher education will decline, a danger that will not only erode the reputation and nature of our work but also sap the vitality of our country to compete on a global scale.

The strategic partnership between higher education boards, their chief executives, leadership teams, staff, and faculty can help to ensure that postsecondary education continues to make a profound contribution through graduates who have the knowledge, expertise, and perspective critical to our democracy and our economic health. College, university, and foundation boards need to recognize that for most institutions, the future will not be the same as the past.

This is a clarion call to higher education governing boards and their members to serve as consequential, strategic thought partners for their chief executives and campus communities. Given that American institutions are widely varied in terms of mission, size, type, location, and student body, a one-size-fits-all solution does not exist. Therefore, my guidance is for boards and campus leaders to collaboratively establish strategic North Stars in the context of what is best for their students; the long-term vitality of their college, university, and community; and our nation’s democracy, society, and economy.

I urge higher education governing boards to deeply understand that they are ultimately accountable for the outcomes of their colleges and universities and must address these challenges. In collaboration with their chief executives, leadership teams, and faculty leaders, boards should establish strategies, policies, priorities, and practices that can favorably influence the long-term health of their institutions to ensure the continued health and vitality of American democracy, our society, and economy. 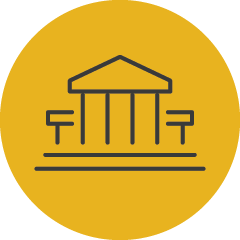 Reports and Statements
Renewing the Democratic Purposes of Higher Education 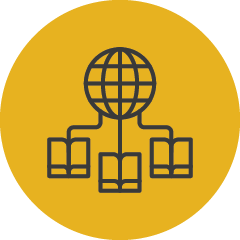