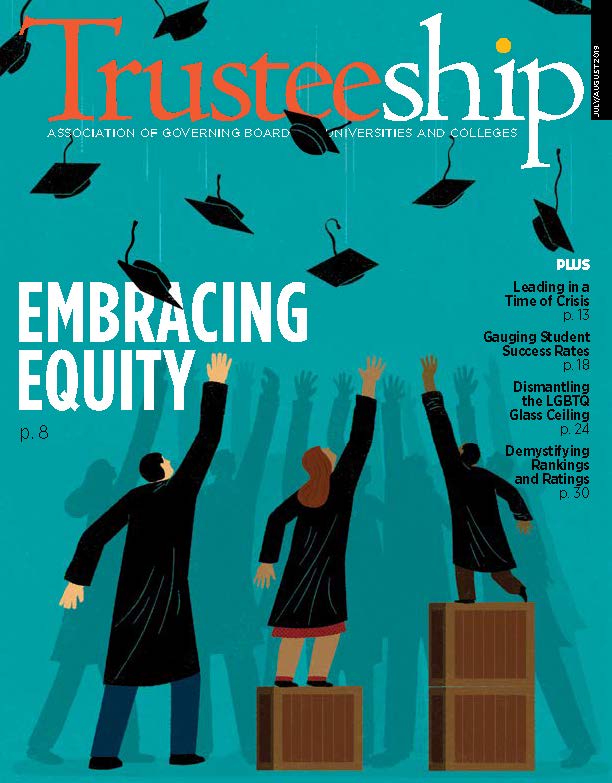 Shifting demographics are changing the course of higher education yet trustees are largely absent from efforts designed to ensure equity among an increasingly diverse student body. A new collaborate aims to redress that dynamic.

Leadership in a Time of Crisis
By Terrence MacTaggart, PhD

While boards have a responsibility to exercise sound crisis leadership they are sometimes blind to the potential for a serious crisis. The current crises engulfing higher education call for greater integrity and a heightened sense of responsibility.

Through the innovative Student Achievement Measure (SAM) colleges and universities can glean a more accurate picture of their student populations than what is permitted by flawed federal graduation rate data.

The LBGTQ Glass Ceiling: When Will it Be Dismantled?
By Jeffrey B. Trammell

The presidencies of universities and colleges are largely the province of those assumed to be heterosexual. That is a fact borne out by history as well as by today’s scant numbers of LGBTQ academic leaders.

Most board members have mixed feelings about rankings and ratings but are anxious to compare their institutions with others. What do board members need to know about these third-party evaluations, including when they add value and when they don’t?

On My Agenda
AGB’s new president looks forward to the association’s next chapter.
By Henry Stoever

Perspective on the News
A sampling of national higher education news

Legal Standpoint
Governance and the Law
By Steven Dunham, JD

Foundations of Consequence
Engaging the Next Generation Donor
By Gretchen E. Buhlig and Mark Antonucci, EdD

View from the Board Chair
Exercising Our Most Important Fiduciary Responsibilities
By Stephen T. Golding

A Question For…
Martin Dinan
How Can Higher Education Institutions Support Student Veterans?