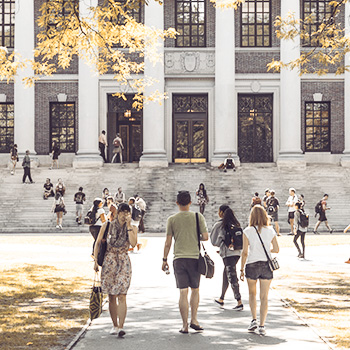 With talk of elections in the air and nonstop media coverage, and a whole host of critical foreign and domestic issues facing our nation, Washington policymaking at best can be confusing to understand, and at worst can be an incomprehensible labyrinth of confusion. It can be extraordinarily complicated to figure out what is just political chatter and what actually might happen on the issues that matter to us.

Higher education policy is no different. Debates abound on issues like student loan forgiveness, the future of the Deferred Action for Childhood Arrivals (DACA) program, the use of affirmative action policies in admission decisions, funding, and so much more. Is Congress or the administration going to take action on these issues, or is it just election year talk? How is a casual observer who doesn’t follow Washington politics supposed to understand what is really going on?

At the Penn Hill Group (PHG), we have developed our own system called the “Four Ps” to help understand and analyze what is really happening on federal education policy. Our goal is not to predict the results of the midterm elections or predict political winners or losers, but to help explain what the prospects are for getting things done on the issues that matter to us.

Here is how it works. We believe that to advance any major policy initiative, there must be at least some alignment of the Four Ps (politics, process, people, and policy), or some overwhelming advantage in one or more of the Ps (like a national emergency or congressional procedure that overrides hurdles that would otherwise normally exist) to achieve an end result—most often, a new or changed law or regulation.

With that as background, here is a brief review of each of the “Ps” and what they may tell us about the prospects for higher education policy:

While the national pastime might be football in most of America, in Washington, it’s politics. Politics is the subtext of practically every action taken by the federal government, and calculations are made by politicians of all stripes on every major issue that moves through the federal policy process.

On rare occasions in this Congress, there have been times when the political interests of enough of the major players in the policymaking process were aligned enough to pass legislation on key issues like infrastructure, microchips and STEM issues, and COVID-19 funding. On most other issues a closely divided Congress—even with both Houses of Congress nominally controlled by the party in power at the White House—was gridlocked.

The politics of federal higher education policy followed much the same path. Congress came together to address a few key higher education issues like COVID-19 funding, additional resources for research, and more money for Pell Grants. But efforts to pass a comprehensive renewal of the Higher Education Act that includes dozens of policies that are important to colleges and universities once again fell short. Bipartisan support in Congress for various higher education policies should not be taken for granted, and the political interests of both parties and their leaders are likely to be extremely complicated for the foreseeable future.

Following each election, political Washington consumes itself with speculation about who will assume the various positions of power when the next Congress reconvenes. For many in D.C., personnel is policy, and choosing who is in charge often determines what gets done. So, while many committee and leadership assignments will not be made for several weeks after the election (which hasn’t even happened as of this writing), speculation is already in full swing.

Whatever the outcome of the elections, we expect major changes in some key positions that are important to higher education. Most obviously, we could be ushering in new majorities in the House and perhaps the Senate that will have a major impact on the policy agenda. In the House, the election could lead to a new Speaker and leadership team that has never led the House before and also possibly usher in an entirely new set of leaders on the Democratic side to replace the team that has led its party for nearly two decades.

The top GOP and Democratic leaders in the Senate are likely to stay the same—even if they switch sides from majority to minority and vice versa. But while the committee leaders in the House seem most likely to stay the same but perhaps switch their majority/minority status, we will have new leaders on both the Republican and Democrat sides of the aisle on the major education policy and (most likely) appropriations committees and subcommittees in the Senate. A significant shift like this in the people who handle education issues has not occurred for many years.

Inevitably, a new Congress, a possible change in party control, and new leaders will bring new priorities on scores of issues from funding to foreign policy to education. There will be new staff, and it will take time to learn their new positions and set agendas. With a presidential election just two years away, and the campaign season starting well before that, this influx of new leaders and staff will add to the challenges of trying to get things done

While it’s not exactly the world’s most exciting topic, it is nearly impossible to figure out what is happening in Congress without at least a rudimental understanding of the legislative process. There are whole books written about the rules of Congress, but the single most important thing to remember is it takes 60 votes to pass most bills in the Senate. There are exceptions for nominations, and a budget process called “reconciliation” can be used (almost always when one party controls both houses of Congress and the presidency) to pass bills dealing with mandatory spending and taxes, but most other bills require 60 votes in the Senate.

The House rules give the majority party tremendous control, and a majority that sticks together can pass bills on a wide range of issues without much if any bipartisan support. As a result, the House passes many bills that die in the Senate without the bipartisan support needed to reach the 60-vote threshold. And of course, the President still can veto any bills Congress sends to him, and it is exceedingly rare for a veto to be overridden.

If different parties control the House and the Senate, or even if the margins are close, gridlock often follows. Gridlock doesn’t mean nothing can ever get done in Washington, however. While large comprehensive reauthorizations are difficult to pass, leaders of Congress use other processes to try to accomplish their goals. For example, members attach amendments to “must pass” bills. These are bills Congress passes every year because of the severe consequences that loom if it doesn’t act—like funding the government or addressing national security threats or natural disasters. In a close Congress, these “must pass” bills become magnets that attract all kinds of amendments as members try to get their priorities addressed. This amendment process may be the only path for some higher education priorities to be addressed in the next Congress.

While it doesn’t seem likely to pass historic legislation, a House (or entire Congress) under GOP control can be expected to take advantage of its new oversight powers to increase its scrutiny over the administration’s actions and policy choices. In higher education this could include hearings on the President’s student loan forgiveness plan, Title IX, campus speech, and other issues that have raised concern for the GOP.

When a closely divided Congress ties itself in knots legislatively, the executive branch often exerts its powers through regulation. Administrations of both parties have expanded their regulatory powers immensely. Congress has been unwilling, and often unable, to check their authority. Several of the clearest examples of this occurring is in the current administration’s higher education policy. The administration is in the process of finalizing many new higher education regulations along with issuing guidance to provide loan forgiveness. These actions have significantly changed the landscape of federal higher education policy in less than two years since the President first took office, and the administration has acted with no official input from Congress. In fact, the only real procedural checks against the President’s regulatory authority have come from the courts, not Congress.

Of course, the “P” that matters the most stands for policy—the new or changed programs, rules, and procedures that actually impact schools, students, and families. But policy outcomes are very dependent on the outlook for the other three Ps. And until their prospects improve, it is hard to see how Congress will be able to take significant actions to change higher education policy, particularly on those issues that have been traditionally addressed as part of an overarching reauthorization. Once again, it seems likely that the Biden administration will continue to be the most likely venue for new policies as it continues to expand its regulatory powers.

So the obvious question remains: what do the Four Ps tell us to expect next year for higher education policy—particularly if there are substantial changes in Congress? Politically, it seems pretty obvious that the political interests of both parties in a split Congress are not likely to be in alignment on most issues, especially with a forthcoming presidential election. There will be several fresh faces leading Congress, particularly in the all-important Senate, who are relatively untested and will face big learning curves as they assume their new responsibilities. The procedural hurdles facing Congress will continue to present many challenges that will be hard to overcome, especially on big bills like a Higher Education Act reauthorization.

As such, when it comes to the most important “P” of all—policy—don’t expect major results from Congress. Instead, while Congress may be able to make a few targeted changes to higher education policies—like funding increases in key programs, improvements to the Pell Grant program, an upgrade in Department of education data collection efforts, and potentially more funding for research—expect mostly oversight hearings and some incremental legislating that will likely set the stage for further activity down the road. Look instead for the administration to continue to press forward with its regulatory agenda.

Vic Klatt is a principal of the Penn Hill Group.