The Personal Qualities of Leaders during the COVID-19 Era 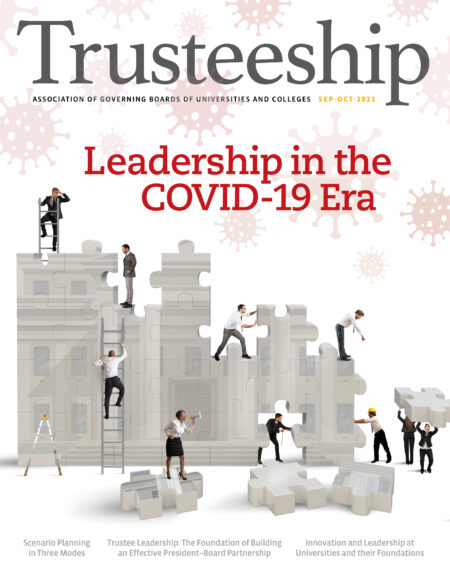 Following Franklin Roosevelt’s inaugural speech and a conversation with the new president in March of 1933, conversation with the new president in March of 1933, Supreme Court Justice Oliver Wendell Holmes rendered judgment: “a first-class temperament.” It is not clear if he was referring to Franklin or Teddy. Apparently, Holmes thought less of one of the Roosevelts’ intellectual capacity since he qualified his praise with “a second-class intellect.” But the venerable justice got it right in recognizing that personal leadership qualities upstage pure intelligence in fraught and uncertain times.

Today’s challenges demand college and university presidents* display exceptional qualities of temperament, personality, and character to meet the realities of a time best described as the COVID- 19 era. This article suggests that relevant personal qualities top the list of qualifications when it comes to recruiting new leaders and supporting incumbent ones. It identifies seven leadership traits that together represent highly relevant characteristics for college and university presidents in this era. It concludes with strategies for recruiting leaders with these traits and for building leadership skills in incumbents who are willing and able to learn them.

The recommendations draw primarily from more than 200 confidential interviews focused on the performance of seven presidents with four to eight years at the helm of their current institution. Separate interviews of the president as well as trustees, faculty members, students, staff, donors, and others began just before the outbreak of the pandemic and continued through its later stages (October 2019 to May 2021). Several of the interviews occurred face to face, although the majority were conducted on a virtual platform.

In addition to commentary provided in individual and group interviews and separate conversations with presidents and trustees, other pertinent indicators of performance contributed to the findings. Presidents’ self-assessments, annual performance reports to the board, prior evaluations, reports of actions initiated in response to the pandemic, and signature accomplishments provided additional evidence of performance, both effective and less so. Institutions represented included well-known research universities, public and independent institutions, liberal and creative arts colleges, as well as institutions within public university systems and those with their own independent boards of trustees.

Each review sought answers to three fundamental questions. How well has the president performed over the last two to five years, including but going beyond actions during the pandemic? What is their potential for leadership going forward? And what personal qualities appear to drive their performance?

Temperament, personality, and character are terms frequently used to describe leadership attributes. Temperament usually refers to one’s basic approach to life inherited genetically; personality is often defined in terms of specific traits; and character points to distinctive features as in “strength of character” to refer to a person with backbone. In this article, I use terms like “personal qualities” to refer to the ensemble of these characteristics unless the context clearly calls for one of them.

Current evidence favors a longer duration than anyone wishes. Variants to the COVID-19 strain are proliferating. Massive infection rates in India with its population of 1.4 billion, and in most developing countries, suggest the virus will not depart soon. Resistance to vaccinations in the United States and elsewhere may well delay if not preclude herd immunity from effectively eradicating the virus. At this writing, the highly contagious strain called the Delta variant is spreading rapidly. The unfortunate likelihood is that the pandemic in varying degrees of severity will be an unwelcome guest in our homes and places of work, often the same location, for years to come.

The immediate impact of the pandemic on colleges and universities has been much less severe in the near term than many feared in January and February of 2021—yet the numbers are dramatic enough. Community colleges have been hard hit with almost 10 percent enrollment losses. This compares to about a 4 percent drop for higher education overall. According to a Chronicle of Higher Education report, the higher education workforce dropped by about 13 percent, mostly from the ranks of lower-wage service workers. For the 650,000 people who were fired or furloughed and their families, the pandemic has been devastating.2

Even when health threats diminish, second- and third-order consequences of the pandemic and responses to it will shape the foreseeable future. Colleges are already experiencing the effects of preferences for and against distance learning, intensified competition in both virtual and physical space, and a loss of interest in the humanities in favor of health care and STEM disciplines. These trends were gathering steam before the pandemic, but COVID-19 accelerated their growth. Instead of imagining a post-COVID-19 return to normalcy, it is more realistic to expect a disrupted future full of surprises, a COVID-19 era.

Government relief measures, as welcome as they are, buy time but not solutions. They feed the habit of deferring tough choices until there are no choices left. The CARES Act (Coronavirus Aid, Relief, and Economic Security Act) of 2020, plus its supplement and this year’s ARP (American Rescue Plan) channeled $77 billion to higher education, with about half of that amount committed to students. Welcome as these cash infusions have been, they do not right the structural imbalances plaguing many institutions.

Crises that hibernated during the height of the pandemic are reemerging with renewed vigor. Requiring vaccinations as a condition of returning to face-to-face instruction will not preclude a long list of campus-centric crises that demand foresight and leadership. The list includes instances of sexual abuse, alcohol- and drug-fueled violence, racial bias and conflict, hate crimes, cyberattacks, and athletic scandals to name only the most likely and impactful. Added to this list is the inevitability of emergencies ranging from floods and tornadoes to armed intruders to a possible renewal of the current or spread of a new pandemic.3

The punchline is that the lingering effects of the pandemic coupled with old problems reawakening will call for presidents equipped with the right temperament, personality, and character to meet the challenges of the COVID-19 era.

The beginning of the COVID-19 era provides what David Brooks describes in The Road to Character as a “crucible moment.” In Brooks’ terms, it is the time of “testing” and “altering ordeals” that both reveal and contribute to the building of character.4 Most presidents earned praise for leading a rapid and effective response to the pandemic. “He put the health and safety of the students and the community first,” was a common observation whether the president was thought to be highly functioning in other ways or not. The choice about continuing in the presidency arises as the pandemic seems to recede, but its long-term consequences remain both pressing and ambiguous. This reality precipitates the crucible moment in the lives and careers of many presidents.

Several presidents reported that the challenges of the pandemic rekindled their enthusiasm for the job. For others COVID-19 pushed them to a personal tipping point leading them to announce retirement or a return to teaching, if fortunate enough to hold a backup appointment as a professor. A third group preferred to let events unfold before making critical life, career, and family decisions.

One president said that the pandemic confirmed that she was exactly where she belonged at this point in her career. She had considered other positions, but the thought of trading a familiar set of challenges for new ones made little sense. She identified personally with the college’s high-access mission and progressive culture. In addition to a sense of calling, she confessed to finding the challenges of the era, including disruptions beyond the pandemic itself, to be exhilarating.

After deep soul searching and conversations with a few close friends, another president chose not to seek a contract renewal. He was justifiably proud of his leadership during the early phases of the pandemic. “I got the college though a tough round of furloughs and layoffs,” he said. His faculty members appreciated his decisions to put the safety of the community first above budgetary considerations. Having restored his university to a stable position as the pandemic receded, he felt it time to release the reins of leadership to a new president with a more vigorous outlook.

Crucible moments for presidents tee up questions for their boards. Trustees ask themselves if the person they hired for a different era has what it takes to lead in the uncertain years ahead. Vice presidents, deans, and members of the faculty are concerned as well since their careers and livelihoods hinge in some measure on the president’s effectiveness. In recognition of the perilous times, presidents weighing their options often seek greater job security. Longer-term contracts and post-presidential sinecures in academic departments are on the table. Not surprisingly, the executive search business is booming. One search consultant said she expected turnover to mount as more presidents tire of the stress of the job and more boards think that the challenges ahead may demand “a different direction” than the incumbent can provide. The task of the search firm, she added, starts with helping the board identify the essential leadership traits for the future, then actively recruiting candidates who possess those traits.

Traits of Leaders in the COVID-19 Era

Seven personality traits combine to make up the right personal qualities for effective leadership in the COVID-19 era. This roster of talents draws from the more than 200 interviews and other evidence of presidential performance described earlier, as well as the author’s experience as an advisor and performance coach for presidents and boards. The features include both hard and soft traits. It emphasizes the importance of both in the personality of effective leaders.5 The optimal personal qualities for the times feature resilience, pragmatic attention to the business side of the enterprise, sensitivity to the motivations and feelings of individuals and groups, the ability to reimagine the future, and the courage to champion the academy and its values.

Recruiting Leaders for this Era

Identifying the right personal traits is the easy part of the job. Recruiting executives who possess them is more challenging. Personal flaws hidden during the recruitment phase will surely reveal themselves soon after the candidate is hired. Penetrating superficial descriptions of candidates’ strengths is the key to a successful search.

These practices will increase the odds of finding the right candidates for this era.

Supporting incumbent presidents with potential in developing their leadership capacity is a wise investment. In the author’s experience, about 70 percent of current executives can benefit from leadership development. Another 15 percent—those who are already top performers—can improve somewhat through coaching and other forms of leadership growth.12 Lack of talent, blindness to their own faults, or a stubborn unwillingness to change afflicts the remaining 15 percent who cannot or will not learn to adapt to meet the demands of the COVID-19 era. A speedy and graceful exit for the last group opens the way for more competent leadership.

A leadership assessment, a personal leadership development plan, and follow-up actions to actualize the plan are the stepping stones on the path to converting a potentially able president to a truly effective one. The assessment part requires an external third-party review focused on the president, the board and governance practices, and the senior team. A personality assessment tool, such as the LMAP 360, helps in identifying strengths and areas for development.13

The goals of development need to be clear, practical, and few. Total personal transformation is unlikely. Instead, the target should be measurable improvement in the areas that can make a difference in the president’s performance where it counts most.

Challenges of the COVID-19 era call for presidents with the right set of personal traits for leadership in this unique time. The most important responsibility facing boards going forward is to discuss the most relevant traits for their institution, then recruit an executive with those virtues or support the current president in developing them.

Terrence MacTaggart, PhD, is a senior consultant and senior fellow for AGB Consulting. He has held the chancellor’s position at the Minnesota State University System and on two occasions at the University of Maine System.