The Cost of Protecting Hate Speech 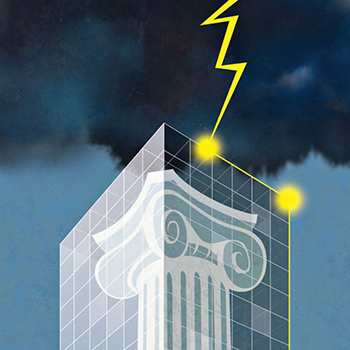 As a member of AGB’s Advisory Council that guided the newly published report Freedom of Speech and Diversity, Equity, and Inclusion on Campus: Considerations for Board Members and Chief Executives, the challenge of cultivating an inclusive campus is on my mind—and likely on the minds of other college and university leaders.

The University as the “Marketplace of Ideas”

For more than a century, legal scholars have used the “marketplace of ideas” as a metaphor to explain the values enshrined in the First Amendment. As early as 1919, Justice Oliver Wendell Holmes embraced this imagery, writing: “[T]he best test of truth is the power of the thought to get itself accepted in the market….”

This metaphor has gained particular traction in higher education as a shorthand for our roles as engines of truth and discovery. The campus itself serves as the “marketplace,” where opposing viewpoints compete for the hearts and minds of our students, where nascent ideas are challenged and developed, and where bad ideas are outcompeted and discredited.

Under this tried-and-true metaphor, offensive speech is merely one of the “goods” in the marketplace. If the marketplace is robust, there is no need to prohibit bad or defective goods. Competition takes care of the problem.

The Marketplace Works Only if It Is Diverse

In defending against court challenges to affirmative action, universities have deployed the marketplace metaphor, arguing that universities have a compelling interest in the educational benefits of a diverse learning environment. We are able to consider an applicant’s race, in a narrowly tailored way, because a robust marketplace demands that our classrooms include people of different backgrounds and life experiences.

For the marketplace to work, free expression and diversity are necessary. Each is required to ensure a variety of perspectives, viewpoints, and ideas to ensure healthy competition.

From Diversity toward Inclusion

The emphasis on diversity that emerged in higher education in the 20th century was not only rooted in the university as a marketplace of ideas. After World War II, universities increasingly embraced their roles as something more than a place for the education of the nation’s elite. Universities began to understand their missions as a public good, to provide opportunities for more Americans to bend the arc of their stories toward opportunity and prosperity.

Diversity was not just about pedagogical benefits derived from many perspectives. Diversity was also about access and equity: compliance with civil rights laws and desegregation orders, growing the workforce, equal opportunity, and social mobility. To be committed to diversity also carried with it a commitment to student success.

As our student bodies have become more diverse, universities have moved beyond numbers to emphasize inclusion. Universities have recognized that for historically under-represented students to persist, succeed, and contribute in the classroom, they must enjoy a sense of well-being and belonging. Underrepresented minorities at predominately white institutions sometimes feel like they are attending someone else’s family reunion. They are welcome to attend. They may benefit from the experience. But they may feel as if the “reunion” was not really created for them. That’s where commitment to inclusion comes in.

The Metaphor Breaks Down: the Justice Gap

As our campuses have become more inclusive, the tried-and-true metaphor does not hold up, especially for dealing with hate speech. The metaphor assumes that the only harm posed by hate speech is the adoption of the offensive idea by others. So long as the idea is outcompeted or discredited, then no harm results. But this assumption does not recognize that when expression devalues, diminishes, or attacks members of the campus community, the speech actually causes harm to its targets. In spite of the “sticks and stones” nursery rhyme our mothers taught us, we all know from firsthand experience that words can and do hurt.

This is where the marketplace metaphor breaks down. According to the metaphor, the “remedy” for bad speech is good speech. But that’s like saying that the only remedy for a defective product that blew up in your hand is the competition. Yes, the exploding widget will lose out to the competition over time. But justice nevertheless requires the seller to pay for the harm caused to the customer who is missing a hand.

Not so with harm caused by hate speech. We must acknowledge that the First Amendment sometimes leaves unremedied harm: a justice gap. In dealing with our students, we must remember that the cost of hate speech is disproportionately born by historically underrepresented minorities and marginalized peoples. We must acknowledge and tend to pain, fear, and loss. We must recognize that some ideas are malevolent and dangerous. Those of us in leadership positions have an obligation to use our voices to speak out against ideas and speech that undermine the institution’s values and mission, provide opportunities to challenge hateful or discredited ideas, and offer support to those who are targeted.

The First Amendment Gets It Right, But Not without Costs

Even as we seek to remedy and combat the impact of hate speech, we must help students understand why we may not do so by punishing the speaker. We must help our communities understand why our country has chosen not to give those in authority, people like me, the power to punish unpopular speech. The power to punish unpopular speech rarely works out well for the under-represented or the marginalized, the reformer or the revolutionary.

To return to the metaphor, when it comes to hate speech, the market is imperfect. But it is better than the alternative.

A complimentary e-book version of Freedom of Speech and Diversity, Equity, and Inclusion on Campus: Considerations for Board Members and Chief Executives is available for AGB members at AGB.org/Freedomofspeech. Print copies are available for purchase.

Book
Freedom of Speech and Diversity, Equity, and Inclusion on Campus
Considerations for Board Members and Chief Executives