Rates and How to Book 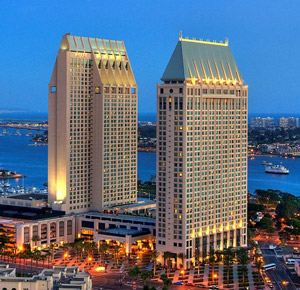 Warning! AGB  has been alerted that unauthorized housing companies (hotel “poachers”) have been contacting individuals offering cheaper rates at the Manchester Grand Hyatt.  This practice, also known as “room pirating”, is a scam that all convention attendees should be aware of in order to avoid passing along personal and financial information. Please only go through the link provided by AGB in your confirmation receipt to make your reservation in the AGB room block. Note, no one from our organization will call you to make your reservation. Hotel poachers will claim to be an AGB partner or the “official housing company” and will sometimes ask that your room be paid in full, up front.

AGB has secured a room block for Foundation Leadership Forum attendees at a group rate of $299 per night (exclusive of taxes).

Once you have registered for the Forum, you will receive a hotel reservation link in your meeting registration confirmation.

Deadline for reserving a room at the group rate is January 2, 2020.

For questions or assistance, please send an email to registrar@agb.org.

Things to do in San Diego

AGB’s Foundation Leadership Forum is the only national conference of its kind. Each January university and college foundation board members and chief executives from across the country join campus presidents and other senior staff for two and a half days of ideas, discussion, learning, and networking.

Focused on governance issues facing IRFs and their boards, the Forum creates opportunities for board leaders and executive teams to share insights, ask important questions, and learn how to create solutions-based strategies founded on best practices. The program strikes a balance between high-level discussions that address today’s—and tomorrow’s—challenges and guidance on practices that have solidified AGB’s reputation as the gold standard for effecting excellence in higher education governance.

Here is the official link to San Diego Tourism’s website. You can also check out travel tips and information about attractions, dining, and things to do while visiting San Diego from the Lonely Planet and Condé Nast.

Getting to San Diego

The major airport is San Diego International Airport (SAN), formerly called Lindbergh Field. All airlines depart and arrive at Terminal 1 and Terminal 2. Free, color-coded shuttles loop the airport and match the parking lot they serve: Lot 1 (green) on Harbor Drive is for long-term parking, and Economy Lot (blue) on Pacific Highway is for short-term parking.

If you need travel assistance at the airport, airport ambassadors are stationed at the information centers in both terminals.

San Diego International Airport is three miles from downtown. Shuttle vans, buses, and taxis run from the Transportation Plaza, reached via the skybridges from Terminals 1 and 2. Metropolitan Transit System’s Flyer Route 992 feature red-and-white-striped buses that serve the terminals at 10- to 15-minute intervals between 5 am and 11 pm. These buses have luggage racks and make a loop from the airport to downtown along Broadway to 9th Avenue and back, stopping frequently within walking distance of many hotels; they also connect with the San Diego Trolley and Amtrak. Information about the Metropolitan Transit System’s shuttles and buses, the San Diego Trolley, and COASTER commuter train can all be found on the joint transit website www.transit.511sd.com.

And you can always use Uber and Lyft to get around San Diego and the surrounding area.

If you plan to travel by train you will need to travel to Los Angeles or Santa Barbara first and change trains for the trip to San Diego.

Keep reading for a geographical overview of how to get to San Diego if you plan to drive. More likely, though, you’ll just use Google Maps, Waze, and rely on your GPS!

I-8 enters California at the Colorado River just west of Yuma, AZ. The interstate roughly parallels the Mexican border to the town of Boulevard. From there it arcs northwestward across the San Diego Mountains, cresting at more than 4,000 feet before descending into the eastern suburbs. After crossing the major north-south freeways, I-8 comes to an end at Ocean Beach, a short distance northwest of downtown San Diego.